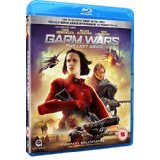 Tribes Battle for a Planet.

This film is from the visionary director Mamoru Oshii (Ghost in the Shell) and brought to you by Production I.G. (Guilty Crown, Psycho Pass) who have given us a major amount of enjoyment from their anime house. Garm Wars has been a long time in the making (reportedly 15 years) and this may be the reason that it feels disjointed or lacking in a full story. Don’t get me wrong this is visually stunning with its live action combined

with awesome CGI, but the story feels like we are not seeing the full story or that this is supposed to be a filler of a series or a computer game franchise lead in, i.e (Final Fantasy: The Spirits Within).

to live upon it, but as time went on the Gods got bored and distracted and eventually left the Garm to fight for the spoils of the planet. With advanced technology given to them by their Gods, the Garm are able to grow clones as the Briga, The Columba and The Kumtak wage an endless war for supremacy.

After a particular battle Columba fighter Khara 22 (Melanie St-Pierre, Long Gone Day) is killed but her body is recovered and her memories are downloaded into her clone Khara 23. This clone survives an attack by the tribe Briga and ends up stranded with a Briga clone Skellig (Kevin Durand, Devil’s Knot), a Kumtak tribal elder Wydd (Lance Henriksen, The Witches of Oz, Aliens), a

sacred dog Gula, and one of the last remaining mystical Druids from a long, long time ago.

The trio form an uneasy alliance as they try to survive and follow the signs and directions of the dog and the druid. They find themselves fighting their way across the planet to ancient lands that harbour deadly creatures and untold secrets that could see the destruction of everything they know and of planet Annwn.

Enjoy the beauty of the acting and the CGI as you are taken on a visual treat.

A Planet Set for Destruction.