4 stars for the glorious conclusion of this fascinating series. 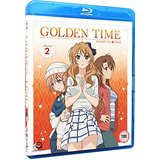 Golden Time is based on the light novel series written by Yuyuko Takemiya and illustrated by Ēji Komatsu. It was adapted into anime by the studio J.C. Staff (A Certain Scientific Railgun) and Collection 2 continues and concludes the story, with the final twelve episodes.

*Spoiler alert – this is a review of the second half of the series, do not continue if you haven’t watched the first half yet!*

“This is the spice of love…”

Tada Banri (Makoto Furukawa – Haikyuu!) is a university student with a difference. The day after his high school graduation he was involved in a serious accident, hit by a motorbike and knocked from a bridge and remembers nothing from before that day. 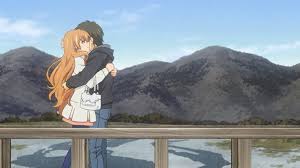 His girlfriend Kaga Kouko (Yui Horie – Coppelion) is aware of his past, and also the fact that prior to his accident he was in love with a girl named Linda (Ai Kayano), who now attends the same university and is a member of the festival club along with Kouko and Banri.

They are all satisfied that the past is behind them now, but Banri’s old self has other ideas. He wants his old life back and makes it his mission to ruin the relationship with Kouko so that he can take over and go back to Linda. 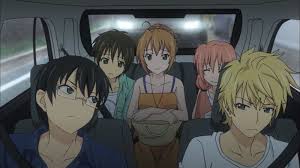 He curses Banri and soon his life starts going downhill rapidly. Just to make it even worse, he begins to occasionally lose control of his body to his old self, suddenly not knowing where he is and believing he was just stood on the bridge waiting for Linda. His next door neighbour Nana (Satomi Sato) tries to help as best she can, but he believes soon he will disappear altogether and forget his new life and friends.

As the festival club make their preparations to perform the Awa dance at the school festival, excitement is in the air and Banri, Kouko and their friends Oka (Ibuki Kido), Yana (Kaito Ishikawa) and 2D (Takahiro Hikami) must try to work through their problems together and ensure they still put on a good performance for the festival.

Golden Time Collection 2 is a very enjoyable anime to watch. It is a very interesting idea for a story and one which has you guessing right to the end. Much like the first half, there is lots of comedy and plenty of great drama but it is also much more emotional, tissues are recommended for several points in the story.

A great love story this and if that floats your boat then it is well worth adding to your collection.

“He rejected the feelings I had to leave behind in this world. I’ll curse you. I’ll become an evil spirit and make you unhappy. Prepare yourself.”

Golden Time Collection 2 is available to buy now on DVD and Blu-ray.