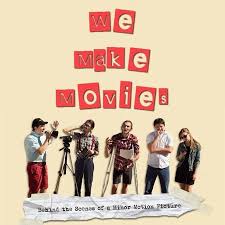 Trouble and Strife on Set.

Writer/Director Matt Tory (The Family) brings us his third independent film. It takes the behind the scenes fly on the wall documentary to the nth degree, in this hilarious look at film making.

Aspiring independent director Stevphen (Matt Tory, The Family) (and yes he chose to spell it like this) wants to make a film for the 13th Kevin Troy Film Festival and he wants to use his 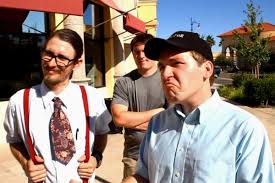 college friends to be part of the crew and be actors. He has a back catalogue of independent films such as ‘Pirates with Carabiners’ and ‘Dreidel to the Grave’.

He and his right hand man Donny (Jordan Hopewell, The Family), who has filled in an application form to go to accounting camp this summer, have allowed some college students to film a behind-the-scenes documentary about the film making processes ‘warts and all style’.

First they have to have a script and cast, so Stevphen and Donny go round to

Garth’s (Jonathan Holmes, The Family) apartment for a visit and get him to join the cast. This where we see Stevphen’s demeanour of not taking “No” for an answer and his dogged determination.

Donny knows of an actor Leonard (pronounced Leo-nard) and he is a method actor with the air of needy.

what it shall be called, a catchy title, “A New Don, The Inspiring Story of How the Presidents Nephew Fell in Love, Saved a Nation and Found His Way Home, Part II.”

Things are going well for Stevphen until Garth points out that his script is just a rip-off of all the greatest film in history. Then Jessica (Ann Crockett, The Familly) bursts in. She soon wants to be in the film and Leonard agrees, Stevphen is stunned and taken aback by his attraction to the fiery woman. It is suggested that they should use Garth’s house-mate Curtis (Matt Silver, The Family) as he

did such a good job in one of Stevphen’s other films, but Stevphen is dead against that idea.

Preliminary stuff sorted, then onto production and the director is keen to run through the kissing scene with Jessica especially now that she has mentioned the Thailand that he dreams of.

filming, method actors act like drama queens, Garth and Jessica get closer together and Stephen’s ire grows at the same rate as their relationship. He believes that they are Guerilla film makers and when they become a family unit they will make a brilliant movie.

This is a hilarious look under the skin of the independent film industry and a clear indication on how not to be a film maker. “You will be laughing out loud”

No Budget, No Talent, No Problem. 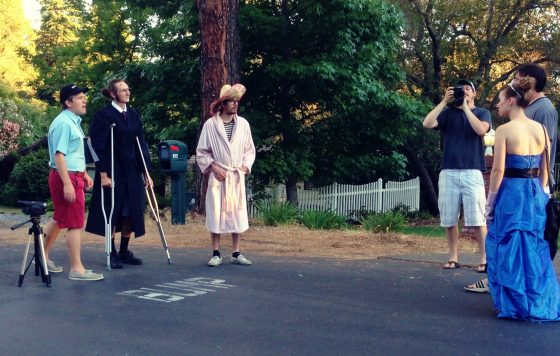 The hilarious new comedy "We Make Movies" is now available for your viewing pleasure. We want you to laugh, and you want to laugh, so go ahead and watch it. We can guarantee at least one lighthearted chuckle."A genuinely funny, enjoyable comedy," FlixChatter raves, "the overall writing is fantastic, with several hilarious one-liners and sight gags." Written and Directed by Matt Tory, starring Jordan Hopewell, Jonathan Holmes, Anne Moyher, Zack Slort, Matt Silver and more. Watch it today:WMMFilm.com