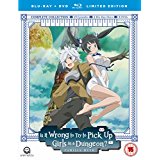 Is It Wrong To Try To Pick Up Girls In A Dungeon? is based on the Japanese Light Novel Series written by Fujino Ōmori and illustrated by Suzuhito Yasuda. It is adapted to anime by studio J.C Staff (A Certain Magical Index, A Certain Scientific Railgun).

“Long ago, we the gods descended into the world of our children, the humans, in hopes of finding excitement and inspiration.” 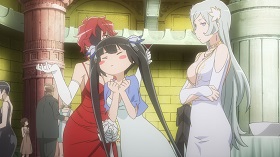 In the land of Orario, Gods live among the population. For their entertainment, the bestow upon the humans “The Blessing”, which allows them to enter the “Dungeon” and slay monsters. The humans blessed by each God become part of their Familia and are levelled up by way of a tattoo on their backs which updates as they defeat the monsters. They can also attain crystal shards which operate as currency. 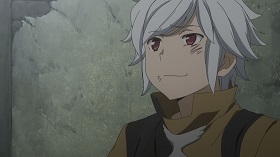 Bell Cranel (Bryson Baugus – Chivalry of a Failed Knight) is a 14 year old adventurer, still at level 1 and the only member of the Hestia Familia, run by the Goddess Hestia (Luci Christian – One Piece, Samurai Bride). He was always told by his Grandfather from an early age that the best way to pick up girls is to become an adventurer and save them from monsters.

However, after an unfortunate incident in the Dungeon involving an escaped Minotaur, he is rescued by the sword princess Aiz Wallenstein (Shelley Calene-Black – Jormungand) finding himself the damsel in distress, not exactly what he had planned, but he falls head over heels in love with her. 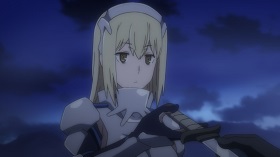 He is befriended by Syr Flover (Juliet Simmons – Akame ga Kill!), a waitress in the local tavern, The Hostess of Fertility. While eating his meal, the Loki (Christina Kelly – Brynhildr in the Darkness) Familia come in and among them is Aiz. Humiliated by her Familia, he runs out and back to Hestia, who makes an interesting discovery. He has acquired a new skill, Liaris Freese, which allows him to level up extremely quickly as a result of his feelings for Aiz. 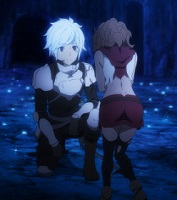 He vows to become strong enough to one day stand at Aiz’s side in battle, and with the assistance of a new knife which Hestia had made for him, his advisor Eina (Shelby Blocker – Trinity Seven) and his new supporter Liliruca (Hilary Haag – Black Bullet), he sets out to level up and make a name for himself in the Dungeon.

Is It Wrong To Try To Pick Up Girls In A Dungeon? is a very entertaining series. The animation is colourful and so are the characters and although it will never set the world on fire storyline wise, it’s really good fun to watch.

This is a must own for gamers, as all the situations are so familiar. Desperately trying to level up, celebrating whenever an item is dropped and agonizing over which food to buy in the local tavern, not to mention the ever present level bosses to deal with. Excellent and well worth adding to your collection.

“I have to overcome everything that confronts me, or I’ll never be able to stand next to her.”

Is It Wrong To Try To Pick Up Girls In A Dungeon? is available to buy now on Limited Edition Blu-ray.