A Portrait of the Soul.

Eureka (Masters of Cinema) bring us another of Fritz Lang‘s (Spione, Human Desire, Der Mude Tod) masterpieces in this black and white film noir. It shows us a tale of a thinking man’s dilemma when he meets the woman in  the window.

The Biblical injunction “Thou shalt not kill” is one that requires qualification in view of our broader knowledge of impulses behind homicide. The various legal categories such as first and second degree murder, the various degrees of homicide, manslaughter, are civilized recognitions of impulses of various degrees of culpability. The man who kills in self defence, for instance, must not be judged by the same standards applied to the man who kills for gain.

He is a loving family man with his wife and two children who are off on their summer vacation, while Richard stays at home to study. His down time is spent at his gentlemen’s club with his two friends District Attorney Frank Lalor (Raymond Massey, A Matter of Life and Death, Reap the Wild Wind) and Dr. Michael Barkstane (Edmund Breon, Gaslight, The Hour 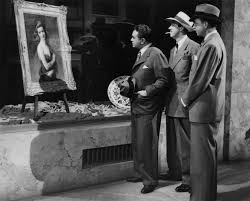 Before the Dawn). Next door to the club is a art gallery and in the window is a portrait of a beautiful woman that catches everyone’s attention and that includes our three gentlemen.

They discuss the beauty in the painting and the chances of meeting such a woman, but they agree, the chance is slim. They question Richard about his regained freedom from parenthood and whether he would be attending a burlesque show, but he declines that heady entertainment. They do agree to meet up every night for drinks and discussions.

“We are three old crocks.

That sort of shenanigan is out for us.”

Richard has another drink and reads a book and asks the butler for a ten thirty call as he gets distracted by the books he reads. It’s the allotted time and Richard is reminded to head home, but before he does he must have one more look at the portrait, as he does he notices a reflection in the window. It’s the same woman, a Miss Alice Reed (Joan Bennett, Scarlet Street, We’re No Angels). They chat for a while and they get along, but Richard is for heading home.

“I could help you”

“I’m not married, I have no designs on you and one drink is all I’d care for.”

He is so impressed with the artist, that when Alice offers to show him the artists sketches he takes her up on her offer of drinks. 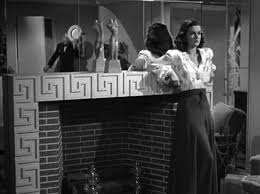 It is now after 1 am and the champagne has been flowing, when Richard cuts himself on a faulty champagne bottle, he asks Alice if she has a pair of scissors to open the bottle. She goes into her bedroom and as Richard waits a man comes into the apartment. He shouts at Alice and slaps her and he rushes at Richard, who is taken aback and soon Frank (Arthur Loft, Charlie Chan and the Secret Service, Street of Chance) has his hands around Richards neck trying to kill him. Richard can do nothing to stop him until Alice passes him her scissors. Bye Bye Frank.

With a body on the floor what are the two to do?

Throw in an ex-copper who was thrown off the force for being bent and anything can happen. 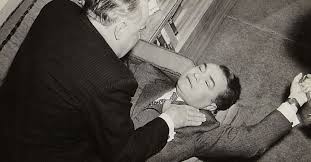 The Woman in the Window is available on Blu-ray