Writer/director Francis Annan (Woyzeck) gets his first chance at a mainstream movie with a well known star who is now growing up and dispelling his early stardom, taking on grittier roles, as in the true life story of Tim Jenkin (Daniel Radcliffe, Harry Potter (Films), Now You See Me 2, Rosencrantz & Guildenstern Are Dead), Stephen Lee (Daniel Webber, Teenage Kicks, Australia Day) and Leonard Fontaine (Mark Leonard Winter, One Eyed Girl, The Dressmaker) who caused a big stir in the early 1970’s in South Africa and its vicious Apartheid regime.

The film starts showing the violence of the Apartheid regime and a narration by lead actor (Radcliffe) about how the minority white population rule and the natives are less than second class citizens and are beaten, shot and more.

Not all whites believed in this regime, they believed in equality of all and some of them joined the ANC (African National Congress) led by the imprisoned Nelson Mandela. Two of these

political activists are Tim Jenkins and Stephen Lee who in 1978 are planting leafletbombs to spread the word of the ANC and to fight the white regime. But they are too slow and are caught by the secret police and branded traitors by their fellow whites.

We see Tim and his frantic girlfriend Daphne (Ratidzo Mambo, The Family

Exchange) smuggling his money to him and telling him not to appeal. The judge comes down hard on the pair giving Lee an eight year sentence and the more proactive Jenkins twelve years in the Pretorian prison for white conscientious prisoners. Before they get to prison Lee takes an oppertunity to escape, he soon finds out that was a bad mistake and they are taken to prison.

There is something and I will find it!

Each get a single cell that has two doors, the first a solid 3″ metal door and then the cell bars that also locks behind them and the guard Mongo (Nathan Page, Noise) loves laying down the laws to the letter.

Day 01 they learn the ins and outs of prison life when they meet fellow inmate and ANC member Denis Goldberg (Ian Hart, Enemy of the State, Harry Potter and the

Philosopher’s Stone) who helps them out with a tour of the prison and all the things you need to know about surviving. Jenkins and Lee also meet 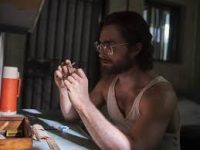 French prisoner Leonard Fontaine (Mark Leonard Winter, The Dressmaker, The Boy Castaways) who wants out of the prison just as much as Jenkins and Lee and it is Jenkins that comes up with the plan to make wooden keys to get out of the cells and throug 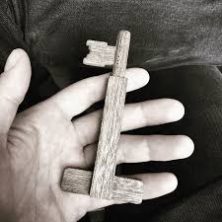 h the many gates to freedom.

You have to push it all the way in, mon ami.

From then on it is mission go. With careful observation, Jenkin’s makes copies of the guards keys and with trial and error and igenious solutions to their problems they hope for the day of freedom. However they are under constant surveillance and random cell searches and Jenkins suffers with his nerves. Can they succeed?

Escape From Pretoria is not like any other escape film as it is totally based in reality, but the tension that Radcliffe deliverers keeps you on the edge of your seat right to the end credits.

Escape From Pretoria is in Cinema’s Now