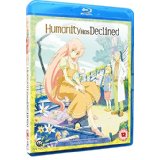 From the pen of Romeo Tanaka comes a tale of what happens when mankind destroys itself and those that survive have to pick up the pieces left by their ancestors a long time ago, but when you add fairies into the mix anything can and will happen.

All of humanity is in decline and now they are in pockets all over the world. One village is Camphorwood and the residence are struggling to find enough

provisions for everybody. Resigned to eating low grade food the villagers go about their business. There is a young girl, a mediator for the UN to mediate with the local fairies, who have advanced powers, but the one thing they cannot do is magic their favourite things, sweets and happiness. But the mediator (She has no name) is one of the last humans who are able to make them. She says that she cannot make them sweets as she doesn’t have the ingredients. This displeases the fairies before putting them to bed.

Then out of the blue supplies start turning up in the village, such as canned meats and fruits. She is also tasked with prepping the last chickens for eating. But

they all escape and it is her shame which she has to cut here hair as a penance. The village try to find the chickens but to no avail, until the mediator spots one and her assistant gets a photograph of it and when looked at it by her grandfather he spots that the now headless and skinless chicken has a FairyCo logo stamped on its flesh. This leads to an expedition to have a look at this saviour of the Camphorwood village. What they find is a fully automated factory spewing out all kinds of goodies. Now the mediator is able to make the sweeties the fairies want so much. 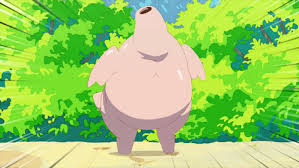 With stories like oven ready chicken trying to enslave mankind, suicidal robot loaves, getting locked in a blank manga magazine, travellers from far,far away, same sex (manzine) manga production, (The human population is in decline unless you produce manga and then you have thousands and thousands of fans) Time paradoxes and asylum seeking fairies just to mention a few wacky ideas.

Being subtitled you get to read everything that is being said, so if you want to learn how to swear in Japanese. (just saying Mr editor). At a 12 certificate I think this may be a little strong for that audience despite its cuetsy pastel pallet.