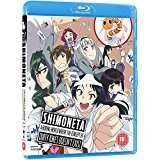 Shimoneta: A Boring World Where the Concept of Dirty Jokes Doesn’t Exist is based on the light novel series written by Hirotaka Akagi and illustrated by Eito Shimotsuki. It has been adapted to anime by studio J.C. Staff (A Certain Scientific Railgun, Golden Time). and is directed by Youhei Suzuki. Shimoneta translates from Japanese to mean “vulgar slang” or “dirty joke”. 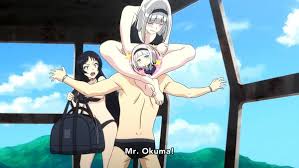 Shimoneta is set in a dystopian future, where Japan has become a country obsessed with morality. In order to crack down on impure thoughts and actions the population have been fitted with Peace Makers (P.M.s), which can detect any form of lewd materials as well as being able to hear when any rude words are spoken. 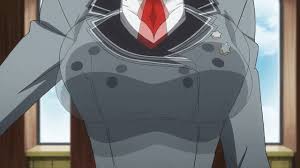 Tanukichi Okuma (Josh Grelle – Snow White With the Red Hair, Brothers Conflict) is a high school student who has applied to attend one of the countries finest public morals school in order to be closer to his crush, Anna Nishikinomiya (Monica Rial – Heavy Object, Tokyo Ghoul), head of the student council and the daughter of the leader of the morality movement. 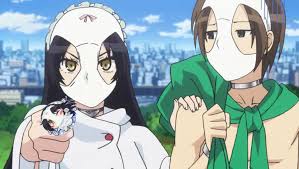 His first day is disrupted when he has a run in on the train with Blue Snow, a dirty terrorist determined to bring back lewd jokes to the young people of Japan. Upon joining the student council, he discovers that Blue Snow is in fact his fellow council member, Ayame Kajo (Jamie Marchi – Brynhildr in the Darkness). Due to his family heritage he is continuously harassed by the curious Hyouka Fuwa (Mikaela Krantz – Noragami) who is determined to learn the secret of pregnancy. 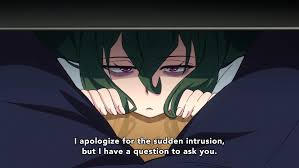 With the entire student body completely uneducated about sex, they have their work cut out even to get them to recognise lewd material, however this does not dent their enthusiasm. 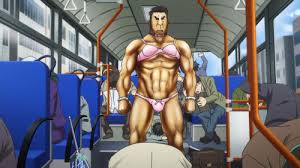 Shimoneta is absolutely hilarious. Admittedly they haven’t really pushed the boat out storyline wise, but it doesn’t matter. It lewd and crude, loud and proud and laugh out loud funny from start to finish. It thoroughly deserves its 18 certificate and should maybe carry an additional warning, not for the easily offended. Nothing is too rude, innuendos abound and there’s nothing better than a bit of light hearted terrorism!

Shimoneta is available to buy now on Blu-ray and will be released on 24th April 2016.