5 Stars of Them against Us. 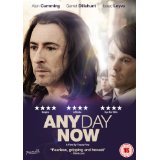 Directed and co-written by Travis Fine (The Thin Red Line) who has the era and the filming style bang on as the belts were high, the collars were wide and the ties were a breakfast.

The scene is set in West Hollywood California 1978 the time of intolerance and the words “gay bashing” were De rigueur and nobody batted a false eyelash at the discrimination. 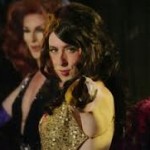 Rudy enjoys his job, lip-syncing with his friends Johnny Boy, (Doug Spearman, Cradle 2 The Grave)and PJ, (Randy Roberts, One Life to Live) but struggles to pay his rent with his earnings. The apartment block he lives in is not the most salubrious and his neighbour Marianne, (Jamie Anne Allman, The Killing) 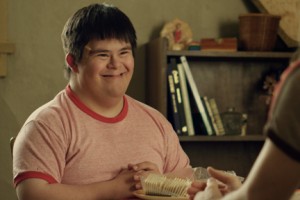 is a drug addict who  plays loud music all the time which annoys Rudy greatly as it will hurt the hearing of her son Marco, Isaac Leyva, who has Down’s Syndrome and is prone to lock people out as he cuddles his favourite toy, a ‘blond doll’.

In the morning the music is still blaring and it is to much for Rudy and he bursts into the apartment and switches of the music and finds that the only person in the flat is Marco and takes him to his flat.

Mean while in Rudy’s life there is a new love Paul Fliger, (Garret Dillahunt, Looper) an ambitious lawyer who has recently realised his sexuality. 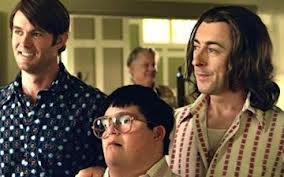 This is where the lies and miss direction starts as Marianne is arrested and jailed leaving Marco with Rudy and Paul until the Family Services turn up and remove Marco, Rudy thinks this is a fate worse than death for Marco and they vow to save Marco and treat him as their own.

So a plot is hatched, Rudy is Paul’s cousin and they live in the same house so that they can have emergency custody of Marco with the co-operation of his mother.

Things are good the couple are happy, as Rudy sees his dreams of becoming a real singer become realised, Marco is happy and doing well at school but at work and when together, connections are being made until they are found that they are cohabiting as a couple.

Now the law and the vindictive people come out of the woodwork and a titanic struggle to save Marco and stop the discrimination of homosexuals.

This film will leave you with a tear in your eye and a big lump in your throat.