4 Stars where the pants are definitely on the outside. 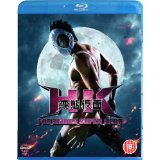 Not in the wildest, darkest nightmares of Batman, Superman, Spiderman or any other crime-fighter for that matter, would they ever think that they would end up looking like this Superhero. “HK Super Pervert.”

From the pen of Keishu Ando comes the story that was serialised in Weekly Shonen Jump magazine, we see the tale of a young man at high school. 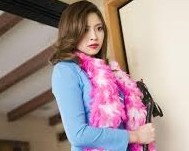 Picture a room, a man on all fours being whipped by a gorgeous woman. Meet mummy, Maki (Nana

Katuse, Death Note: The Last Name). In bursts the police officer, Shikijo, in charge, but he soon finds himself trussed up with Maki’s superpower and enjoying the beating being dished out. Meet Daddy.

A young boy is born and he is brought up by his sadistic mother after his father is killed at work. Now Kyosuke Shikijo (Ryohei Suzuki, Kids Police) is the most talented member of the school’s martial arts club and he sees himself as 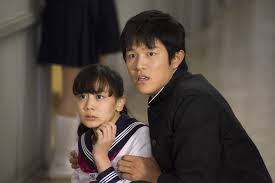 the protector of the oppressed, just like his father. When he sees Aiko (Fumika Shimizo, Kamen Rider:…), the new student being bullied, he steps in but his body isn’t up to his morals. For Kyosuke it is love at first sight.

He will do anything to get her to be his girlfriend but he is bashful. When he finds out that she and bank workers are being held hostage and they tell the police they want a helicopter or they’ll start shooting hostages every half hour starting with Aiko, he must intervene.

His sense of honour and his infatuation with Aiko sets him off on a rescue mission. Finding a back way up he falls through a window and discovers one of the masked robbers who he ties up using powers inherited from his mothers perverted talents. He realises he needs a disguise and steals the robbers clothes and it dawns on him that he needs a mask. Forgetting the robbers mask, he finds something that he thinks will do. He puts it on then realises that they are women’s panties, but when he goes to remove them, they are welded to his face and then it starts, he’s enjoying it and there is a thrill in his heart. 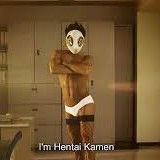 This is where the comedy really kicks in, you cover your eyes as the Pervert Mask gets into his role as a crime fighter, with a plethora of special pervert moves that have the criminals with a face full of superhero crotch.

You will be horrified, amazed and laughing out loud at this outlandish ham-up of the super  twisted pervert with a conscience and the love of a woman who has fallen for the pervert. He has to deal with assassins sent to get him out of the way for the treasure beneath the school, and the teacher that has designs on Aiko and when the much publicized Pervert gets lampooned, he must find the imposter and put a stop to his skirt lifting antics.

Awesome fun and thoroughly deserves a spot on your Blu-ray shelf.