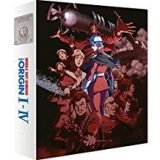 A 1979 story gets a 2015 update which answers so many questions and with modern anime, it turns this classic mecha story into an all singing all killing story. Studio Sunrise (Steamboy, The Girl Who Leapt Through Space, Tiger & Bunny, Love Live! Sunshine!!) brings us the answers to some long running questions of backgrounds, reasons for, and the ‘but whys?’. With modern animation techniques the vistas and action are stunning. The pre

0079 and One Year War events are revealed, the tensions, the accusations and the story of revenge emerge out of this digital world.

The story starts with an explosion or two as we see what shall pass, and with the new computer graphics it looks a whole lot more interesting, but they have done it in such a way that it still feels Gundam.

On the furthest space colony away from Earth, Side 3 Munzo, the leader Zeon Zum Deikun has listened to his people and agrees with them that they should have a autonomous Republic away from the Earthnoids and be rid of the Federation.

But just as he is about to start he has a heart attack and dies. Leaving the country in turmoil and wife Astraia, son Casval and daughter Sayla distraught. 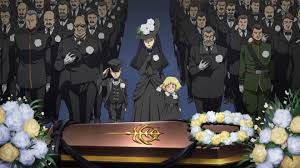 It doesn’t take long for their family friend Jimba Ral to point the accusing finger at the Zabi family headed by the unforgiving Degwin Sodo Zabi, seconded by his sons Gihren and Dozle and the ruthless daughter Kycilia and the scardy cat youngest son Garma.

After the funeral, in the cortège home, Dozle is being harangued by Sasro about his incompetence but before he can finish his sentence the limo explodes in a ball of flames.

as to who is to blame. With the remaining Deikun’s in danger of being murdered, a plan is put into place to get the children and Jimba off world and find refuge on planet Earth. This is tasked to Captain Ramba

Ral, whilst Degwin sets himself and his family to take over Munzo.

MSGTO gives plenty of new content and great anime as plans for revenge get under way and rivalries are settled and the development of Mobiles marches on from their humble beginnings as workers to the Mobile suits we recognise as Gundams.

With 4 one hour episodes, this is just great to sit back and enjoy the full story unfolding. A must for MSG fans. 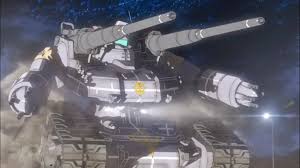