5 stars of fast paced Bleach action from Ichigo and his friends. 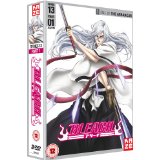 Yay, back to the story-line again, as you can tell by the title of the first episode, “Ichigo Vs. Ulquiorra, Restart!”

This series begins where series 11 left off and is the beginning of The Fake Karakura Town arc Part 2. Lord Aizen continues in his attempts to destroy Karakura Town in order to create the Ōken  (the key to the dimension in which the Soul King resides). 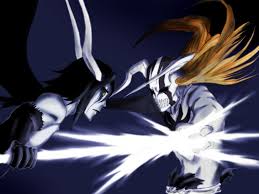 As he departs for Soul Society to fight the 13 Court Guard squads defending the fake Karakura town there, taking with him his top three Espada and their Fracción, he leaves Orihime and Las Noches under the protection of Ulquiorra until his return.

However, Ichigo is on his way to the rescue, with Rukia, Sado and Renji heading to Las Noches to save Orihime. As the others become embroiled in their own fights with hollows, Ichigo continues alone to take on Ulquiorra. 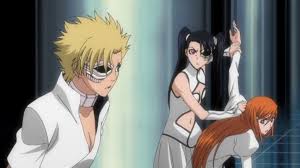 As Ichigo battles with Ulquiorra, Loly and Menoly, still jealous of Lord Aizen’s feelings for her, spot a perfect opportunity to dispose of Orihime. They are interrupted in their plans however, by the arrival of Yammy Llargo, who wishes to join the fight.

Uryū’s timely arrival takes Yammy and the girls away from Orihime and an escalation in the fight with Ichigo leads Ulquiorra to break through the canopy of Las Noches, to where he can unleash his full power.

There follows a desperate battle, which it seems will be too much even for Ichigo, he will need all the strength of his friends behind him in order to survive both the battle and the aftermath of his actions. 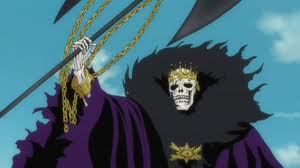 Meanwhile back in Karakura town, Head Captain Genryūsai Yamamoto traps Aizen, Gin and Tōsen inside a wall of flame. This allows the other remaining captains to battle the three Espada, as Hitsugaya takes on Harribel, Suì-Fēng takes on Barragan and Shunsui Kyōraku engages Coyote Starrk, the number one Espada.

This is a definite must own for any Bleach fan, we are really getting to the meat of the story now, and with a surprise arrival at the end leading to a good old fashioned cliff-hanger, this is going to leave you on the edge of your seat waiting for Part 2 to be released.

“I understand. I see now. In the palm of my hand is a heart.”

Bleach Series 13 Part 1 is available to buy now on DVD.