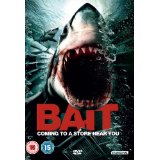 This is a film that bites far up the evolutionary chain.

Picture an idyllic scene on the Queensland Gold coast the young and the old enjoying  the sea and surf, the lifeguard paddles out on his board towards a buoy just as a swimmer suddenly disappears, spotted from the beach the shark alarm is sounded, then the newly engaged Josh (Xavier Samuel – The Twilight Saga; Eclipse) to Rory’s sister Tina (Sharni Vinson – Step Up 3D) heads out on a jet-ski to warn Rory (Richard Brancatisano – Things to Do 2011) when suddenly boom; you get why this film was made for 3D as a massive shark springs from the water destroying the board and throwing Rory into the sea along with the Great White Shark, Josh frantically tries to save him, but to no avail.

Skip one year and Josh is working in the local Food Mart where all a sudden he is confronted by his now ex Tina who has just returned from abroad. Then the proverbial hits the fan when a robber confronts the store manager and as the robbery goes wrong and shots are fired just an earthquake hits causing a tsunami to hit the small town flooding the food mart and the car park below.

After the initial shock of their situation and how to get out of the destroyed mart the small ensemble realise there is something hungry in the water, 12ft of White shark.

This is a great romp by Kimble Rendall (I Robot) who has created the first Australian 3d production which can be seen in the special features, these give an insight into how much work goes into making such a production from the graphics to the animatronics.