Francis Rossi and Rick Parfitt arrive in Fiji ready to play a series of concerts on the islands accompanied by their long suffering manager/minder Simon, Craig Fairbrass – (The Bank Job) and the new intern Caroline, Laura Aikman – (Keith Lemon: The Film). 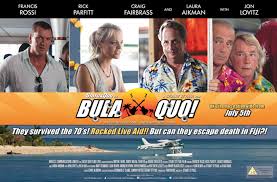 Francis and Rick are soon up to their usual antics of going off to find drinks and checking out the local sites of the  island as one of the band pushes Rick off a waterfall, working as ever Simon uses this prank as a publicity stunt and soon the local, Fiji Sun, newspaper is reporting the untimely demise of the rocker.

Caroline believes she has just got a job handling dinosaurs and she isn’t as impressed with them as Simon is, ‘I studied modern media and I ended up in a museum.’

Soon they are at the after show party where Reiko Best, Jean Heard – (Freight) who works as the news anchor for local Fiji News TV Station and the budding reporter Dave, Matt Kennard – (Freight) with his mentors words ringing in his ears ,”There is always a story“, and his thoughts of Caroline he heads off after the band and his story.

Our pair of miscreants head off to find some local entertainment and find themselves at a not so salubrious bar, followed closely by Caroline who cannot get into the bar until Simon shows up, where they confront the pair who pay them no attention as they are preoccupied with the horde of locals heading out the back of the property, slipping their pursuers they hide on a roof overlooking the scene below. Where they witness something but not sure what but they do know the (Game) being played.

With a distraction they try to make their retreat but they are seen by Wilson, John Lovitz – (The Simpsons’ Arti Ziff) The local bad man with some very nasty habits.

Now the fun begins as the whole crew try to get the information out to the police whilst staying alive. 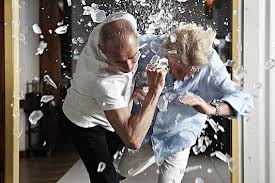 A plethora of vehicles are used,  seaplane, scuba gear, golf carts, jet ski’s and speed boats are used by Francis and Rick and their entourage as they evade capture.

Wilson plays a his role with a camp calmness whilst everybody else runs about madly whilst chasing the seasoned rockers.

The rest of the band Andy Bown, John ‘Rhino’ Edwards and Matt Letley are present just to add to the authenticity but they are mainly in the back ground.

The director Stuart St Paul seems to have met most of the cast whilst making the 2010 film Freight. But what he has created here is a fun romp reminiscent of the Morecambe and Wise film The Intelligence Men. 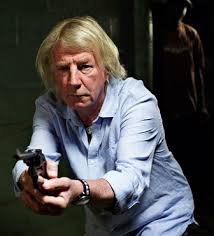 If you are a fan of comedy you should enjoy this 78 mins of sunshine, Rock and murder.

If your a fan of the Quo then you will love every minute as I have. (I’ve watched it twice already.)

The fans must book on line because I fear some sites will sell out, as some are event screenings, just one night. they need to check and if they are near a one night site, consider booking.

Check out the trailer

Now Available to Buy on DVD & Blu-ray with added Extras.