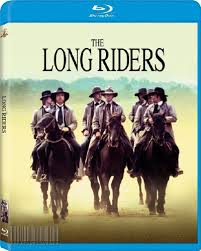 mes gang. Rather than the usual portrayal of Jesse James and Cole Younger in other big Westerns.

It follows the exploits of Cole, Jim and Bob Younger (David, Keith and Robert Carradine) Jesse and Frank James (James and Stacy Keach) with Ed and Clell Miller (Dennis and Randy Quade).We follow the gang as they take revenge from the banks and the rail road, just taking from the people that can afford it, gaining them the reputation of latter-day Robin Hoods.

Until Ed Miller, (Dennis Quade – The Day After Tomorrow) Bungles a bank robbery by shooting a bank clerk, which leads to not so brotherly love by Clell, (Randy Quade – Brokeback Mountain) where he is kicked out of the gang.

Which is good as Dennis and Randy do not look like brothers. 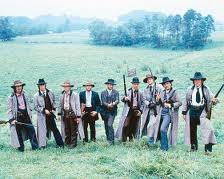 All the bank robberies and train heists take a toll on the companies who employ the Pinkertons to stop the gang in their tracks. They have less luck than the gang as they cannot be found as the locals hide them; or they spend their ill gotten gains on liquor and whores Cole Younger, (David Carradine – Kill Bill) in particular.

But they are all farm boys when it comes down to it and they want to settle down whilst they plan the next big job, while the Pinkertons try to flush them out of their mothers farm but kill their younger disabled brother, this is when the Younger/James gang take the fight to the Pinkertons personally. These massacres of the (Lawmen) escalates the proceedings.

The end of the film is awesome as they head for their next big hold up, Jesse, (James Keach – Walk the Line) calls them together along with his brother Frank (Stacey Keach – The Bourne Legacy). This is their famous last robbery attempt at Northfield Minnesota, and it is spectacularly filmed.

The picture is clearer than when it came out in 1980, the acting is brilliant, with such a cast it is to be expected and we are not disappointed.

There is over an hour of special features making this a great edition to your Western collection.

Available to buy on Blu-ray now.