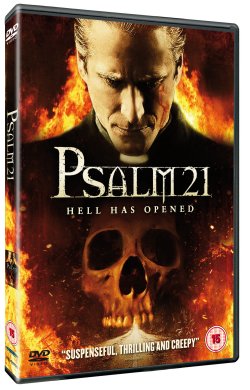 Psalm 21 is, I think it’s fair to say, one of the least horrifying horror films I have seen for quite some time. I have decided to give it one star for the purposes of this review, because of the very well executed special effects (otherwise we may be looking at only a half).

Psalm 21 is a Swedish film, subtitled in English and is the directorial debut of Fredrik Hiller. When first watching the film, the need to try and create a moody atmosphere does unfortunately seem to clash rather badly with the ability to make it interesting to watch. The acting style and script seem incredibly stilted. Whether or not this is due to the fact that the film is Swedish and therefore takes a different approach than I am used to, it is difficult to judge.

The special effects in Psalm 21 are very good indeed, the CG is excellent and it seems a shame having watched it that they are actually completely pointless. They look very pretty but have little if anything to do with the story, and seem to be thrown in just at random moments.

Any chance of getting into the story is fairly well ruined at the end of the film where it seems that whatever religious axe the director had to grind, he let it get the better of him and forgot he was supposed to be making a film and telling a story, as it mostly degenerates into over enthusiastic yelling, milling around, and then more yelling. Although it is more exciting than the rest of the film, it isn’t really necessary and makes the whole thing feel too much like a political statement.

Included on the disc is a special feature showing the building up of the special effects, which is good, but on the whole I wouldn’t really recommend this one to anybody.

Psalm 21 is available to buy on DVD