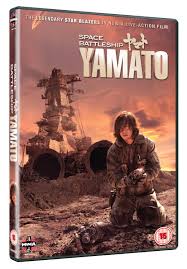 2194 Captain Okita (Tsutomu Yamazaki, Departures) finds himself and his armada near the orbit of Mars, as Earth has come under the fire of an alien race that he knows nothing about, apart from they use massive meteors as weapons to bombard the surface of the planet and cover the surface with radiation.

They fire on the enemy but little happens; they have underestimated the power of these aliens, as they return fire the Earth ships are torn asunder as they try to flee, Captain Mamoru Kodai (Shin’ichi Tsutsum, A Lone Scalpel) contacts Okita and tells him to get back to Earth as he is about to put his ship in harms way, sacrificing his ship and crew so someone can tell the story of what happened that day.

From the outset this space battle opens your eyes as the graphics are awesome competing at the same level as any Hollywood production. It’s a frantic battle and in Blu-ray you don’t know which way to look.

But move on five years and Earth is a smouldering desolate and radiated wasteland, with the survivors of the constant bombardment living underground.

Those in charge don’t hold out much hope for the future of the human race as no contact has ever been made with the enemy. “The Gamilas“.

One such survivor is the scavenger Susumu Kodai, (Takuya Kimura, Howl’s moving Castle) the younger brother of the heroic Capt Kodai, he goes topside and looks for salvage under the constant surveillance of his analyser. When out of the blue something comes crashing into the ground knocking out the scavenger and rips off his protective helmet, upon waking he struggles for breath and checking his analyser he finds that he has received a fatal dose of radiation, then he spots an alien object near him. 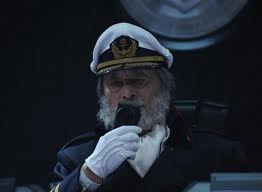 This where Susumu meets Capt Okita the man he blames for his brothers death. Their first encounter doesn’t go well as Dr Sado (Reiko Takashima, Pride) tries to work out why her patient is so perky. Until Yuki Mori (Meisa Kuroki, Assault Girl) puts the proceedings to rest.

The alien artefact turns out to be Schematics for a warp engine and coordinates for a device that can remove the radiation from the planet. But the coordinates are some 148,000 light years away.

It is some time later when those in power think that the Earth has only a matter of months before extinction, so Capt Okita requests the new warp ship to be his next mission, a mission of hope, the last chance for mankind, and asks for a volunteer crew and Susumu Kodai joins as the leader of the fighter craft.

But the enemy find out about their plans and send a massive missile towards the warp ship, arise Space Battleship Yamato.

They have to fire upon the missile, destroying it, they have revealed their hand as up till now humans have had nothing to touch their enemy, so they head of into the solar system to test the new untested warp-engine.

But when they do test it they jump within the solar system and find the enemy is in hot pursuit and they must find a way to defeat the superior opposition.

What ensues is mesmerising with the characters getting acquainted and reacquainted with each other as they battle their way across the universe to find this miracle device that will return the Earth to its lush green past. What lies on the planet Iskandar?

Does it really exist or will the Gamilas thwart them and inherit the remains of the human home; Earth.

A must for every-bodies anime collection, This stands up shoulder to shoulder with the big Hollywood Si/Fi.

Available to buy Now on DVD and Blu-ray.