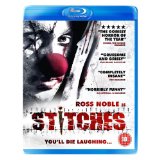 For a horror comedy this is not bad, I have given it 3 stars.

Stitches tells the story of a down and out clown who performs at a children’s party to a less than receptive audience. As a result of their pranks, tragedy ensues and the clown (Ross Noble – stand up comedian) is unable to complete the party.

Enter the sinister cult of clowns and their strange rituals involving eggs and graveyards. I would have liked them to expand a bit more on this concept, to up the fear factor a bit. I felt it was glossed over somewhat.

The kid, Tom, whose party it was, still has flashbacks about that day, and is very paranoid about clowns, leading to some silly sequences which are funny and left me wondering how the actors kept straight faces during filming. (Watch the credits – turns out they didn’t!).

Skip six years and throw in a house full of misfits and drunk teenagers (some of whom were at the original party) and Bob’s your uncle.

There are lots of moments of comedy, I did laugh out loud several times and there is certainly plenty of horror, in the form of blood soaked special effects which obviously took up most of the budget and are very well done.

The acting is pretty good from the young stars, Tommy Knight (Waterloo Road, The Sarah Jane Adventures), Gemma-Leah Devereux (Casulalty, The Tudors), Lorna Dempsey and Eoghan McQuinn, both relative newcomers. Ross Noble is quite scary in the role of Stitches , comedians do always seem to make the best clowns.

The concept of Stitches is of course always going to be scary, after all, who likes clowns, but unfortunately it all just seems a bit contrived and unpolished.

Nevertheless, it is entertaining and as long as you are over 18 and you like a good blood fest then you will probably enjoy this horror romp.

Stitches will be available on DVD and Blu-ray from March 4, 2013