Calling all Fans of the Predator franchise.

Here is the work of James Bushe (Secrets of the Dark House (short)), written and directed by James, and filmed by Simon Rowling (9 Months) they bring us the tale of battle weary Templar knights, returned to England in the hunt for a Demon.

The fan Short will get its World Premier. showing this weekend 23/05/2015 at the London MCM approx 2:45 on Saturday in the Vidfest Section. 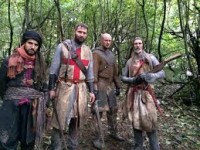 Thomas (Adrian Bouchet, Arthur & Merlin) leads a band of Templars, who is charged with finding whatever has been killing villagers and other knights, as tales of a mystery killer spreads the land. After a hefty donation by the near-by village Brother Joseph (Anna Karenina) takes Thomas to his tent where he meets Sied (Amed Hashimi, Devil’s Tower), a despised Saracen who has encountered the Demon before. Thomas is not happy about this arrangement, and neither are his comrades. 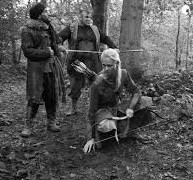 Freya (Sabine Crossen, Covert Operation) is an expert tracker and she soon has the team on a hunt for who or whatever has dragged bodies into the woods.

This is where the film becomes one for the fans as the Predator (Philip Lane) does what Predators do best, and this is what we have been waiting to see for ages. And it comes from the fans to the fans.

An excellent homage to a great set of Hollywood films that brought us one of our favourite space travelling killers. With the acting talents of Joe Egan, John Campling and Ben Loyd-Holmes who help bring this production to Life.