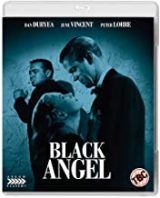 A Singer, A Drunk and an Accused Man.

Black Angel is Roy William Neill’s (Fifty Fathoms Deep, Murder Will Out, Frankenstein Meets the Wolf Man, Sherlock Holmes Faces Death) swan song after a career spanning nearly thirty years and one hundred and ten directorial credits. Black Angel is a Film-Noir, with its sights definitely set on the dark recesses of a befuddled mind and a woman’s dedication to the man she believes in. 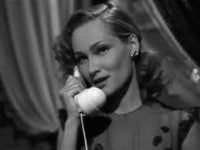 1946 Los Angeles, Wiltshire, the Palace Hotel with a posh apartment on the tenth floor, Miss Mavis Marlowe’s (Constance Dowling, Knickerbocker Holiday, Gog) abode and as her

maid Flo (Mary Field, The Prince and the Pauper) prepares to leave for a night out, Miss Marlowe dresses finely in her boudoir but she decides to retrieve a small pistol from a drawer, just as the door bell rings. Does Mavis Marlowe have a plan of murder or is the pistol for defence? No. Flo comes in with a small package delivered by a bus-boy.

Before Flo leaves for her night out Mavis asks her to put some music on, but Flo’s choice is poor. Mavis hates the song, a song that she sang on the recording

“Heartbreak” a song her husband had written and played piano on, the package is also from her husband Martin Blair (Dan Duryea, The Flight of the Phoenix, The Woman in the Window). It is a heart-shaped ruby heart pendant  and she doesn’t want it. Mavis picks up the phone and calls downstairs to the doorman (Dick Wessel, Dick Tracy vs. Cueball) and she tells him that she doesn’t want to see Martin Blair not now, not ever.

Just as he is on the phone the afore mentioned Mr Blair enters the building, the doorman hangs up and asks the gentleman where he is headed? Mavis’ apartment is the answer, the doorman tells the man that he cannot see her. “She is my wife” and he makes a break for the elevator, but the doorman stops him, Blair goes for a punch but thinks better of it and resigns himself to leaving. Hands in pockets he heads out just as a short man enters the building 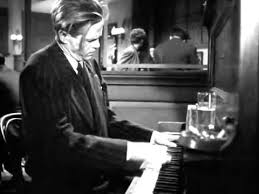 saying that Miss Marlowe was expecting him. Is Miss Marlowe’s pistol for this mystery man? As Blair heads off, we see two men in a car watching the front of the Palace Hotel.

The Palace Hotel as sirens wail, a man rushes across the road to Al’s bar to find a very very drunk Marty Blair playing his songs on the piano. Joe (Wallace Ford, Twilight for the Gods) thought that the sirens were wailing for Marty, on his last bender. Joe takes Marty to his room where he collapses into a drunken stupor, so Joe closes and bolts the door at ten thirty, then he leaves, shutting Marty in until the morning.

Then at 12:15 room 1004’s door is ajar as Kirk Bennett (John Phillips, 7 Men from Now) enters the apartment of Mavis Marlowe, the first thing that strikes him is the record on repeat play “Heartbreak”. He calls out but there is no reply, then he decides to have a cigarette but his lighter doesn’t work. However he finds a half used book of matches with “Crestview 2111” written on the inside, he goes to light his cigarette when there is a crash of breaking glass. What he finds is Mavis on the floor, her pistol on the bed and her monogrammed scarf wound tightly round her neck, he does spot the heart shaped brooch on her dress. H e goes to make a phone call when he hears a thud, he goes and checks Mavis’ body is still there

but the brooch has vanished. Kirk makes a hasty retreat, but is spotted by a returning Flo.

Our mystery begins, but to detective Flood and his Sgt Baker it is an open and shut case, Kirk was spotted and his prints were all over the apartment.

But to Kirk’s wife Catherine Bennett (June Vincent, Can’t Help Singing, Shed No Tears) this is all a miscarriage of justice and she must do everything in her power to prove Kirk’s innocence, even if it means teaming up with a lush piano player because California has the death penalty.

The scene is set for a murder mystery and when you throw in the sinister Peter Lorre (Casablanca, The Maltese Falcon, Arsenic and Old Lace, 20,000 Leagues Under the Sea) you know something is afoot.

Classic Film-Noir, can you follow the clues and avoid the red herrings? 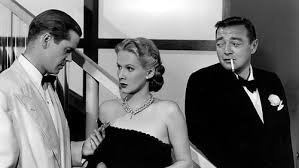 Black Angel is available on Blu-ray