A 5 star look at the history of an iconic brand. 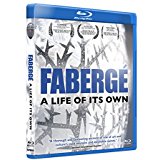 Fabergé: A Life of Its Own is written, directed and produced by Patrick Mark (The Last Man On the Moon) and masterfully narrated by Samuel West (Van Helsing, Notting Hill).
Enjoying unprecedented access to Fabergé’s greatest creations, insights from leading experts and interviews with descendants of the Fabergé family, Fabergé: A Life of Its Own charts the rich history behind the iconic company, from the monumental rise of ‘artist jeweller’ Peter Carl Fabergé in the 19th Century to the enduring legacy of Fabergé today. 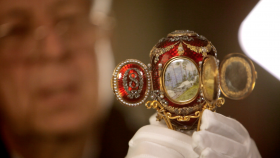 Shot in multiple locations across Russia, Europe and USA, the film features the collections of Her Majesty the Queen in London and His Serene Highness Prince Albert in Monaco, alongside some of the world’s greatest private and institutional collections. I

Culminating in the exclusive unveiling of what is generally perceived to be single most spectacular Fabergé object ever produced –the Winter Egg of 1913 -the documentary also presents hundreds of other exquisite Fabergé pieces in intricate detail.

Fabergé: A Life of It’s Own offers a fascinating and clearly very well researched history of one of the most famous and well respected names in jewellery making. It is well written and very informative, offering lots of revelations and presented in an exceptionally watchable style. 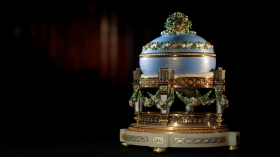 The Love Trophy Egg by Fabergé, presented by Tsar Nicholas II to his
mother, the Dowager Empress Maria Feodorovna (Easter 1907)

The in depth look at the people and processes behind these iconic works of art really brings home the quality of these pieces and why they are still so sought after even today. It is also interesting to see the direction the company is heading in a modern and contemporary setting.

A must own for anyone with an interest in beauty and the finer things.

“I have little interest in an expensive object if it’s price is only in the abundance of diamonds and pearls.” 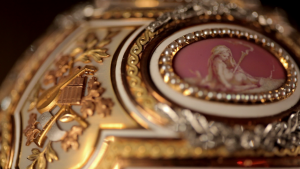 Fabergé: A Life of It’s Own is available to buy now on iTunes, On Demand, DVD and Blu-ray.