Portrait of a Legend.

With only his second feature, writer/director Robert Goold (True Story) was set the task of taking the ‘Olivier’ and ‘Tony’-nominated West End and Broadway play End of the Rainbow by Peter Quilter. What a job he has done. With Renée Zellweger (Jerry Maguire, Bridget Jones’s Diary, Chicago, Miss Potter) stealing the show as the forty seven year old who has fallen out of favour with the American audiences.

With the use of flashbacks we pass between the fourteen (Darci Shaw, The Irregulars) and forty seven year old Judy Garland (Renée Zellweger) and the hold that studio boss Louis B. Mayer (Richard Cordery, Lorenzo’s Oil, Madame Bovary) had over the naive Frances Ethel Gumm, from Grand Rapids, Minnesota, but he tells her that she has a talent no other girls have, her voice.

“My entire childhood I must’ve slept five hours total,it’s a wonder I learned to use cutlery, let alone learned to play a violin.”

Meanwhile in 1968 Judy is performing with son Joey (Lewin Lloyd, The Aeronauts)and daughter Lorna (Bella Ramsey, Game of Thrones). When they return to their hotel they find their room has been taken away from them due to nonpayment. Judy has no choice but to go to her ex-third husband Sid Luft (the children’s father) for a nights sleep, but he just wants to take care of the children.

“I really am hungry, here have this it will take the edge off your appetite, but I want to sleep tonight, I’ll give something for that later.”

Judy ends up at a party where she meets Mickey Deans (Finn Wittrock, My All-American), a nightclub owner from New York and they hit it off. Another flashback sees Judy with Mickey Rooney (Gus Barry, Deadly Intent) in a fake burger bar, she isn’t allowed to eat the real burger because L.B doesn’t want her putting on weight during filming, so her guardian gives her amphetamines to help control her appetite.

Judy’s reputation for being late, awkward and out of it has worn so thin with

audiences and directors etc., that her career is all but over in the U.S. An agent says that the UK wants her and that if she wants to be able to buy a house for the children she must earn the money in the UK. Reluctantly she leaves her children 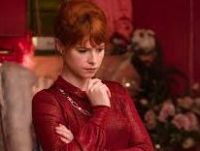 with Luft and heads for a glittering reception in London at the ‘Talk of the Town’ where she meets owner Bernard Delfont (Sir Michael Gambon, Gosford Park, Harry Potter and the Prisoner of Azkaban, Fantastic Mr. Fox, The Death and Life of John F. Donovan) and Judy’s new assistant Rosalyn Wilder (Jessie Buckley, Beast, Wild Rose) who has a difficult time keeping Judy in line as she misses her opening night.

“Never hold up a movie of Mine.”

Can Judy bounce back and win over the British audiences?

An outstanding performance from Renée Zellweger who brings Judy Garland to life and she makes you feel every piece of pain in her heart. 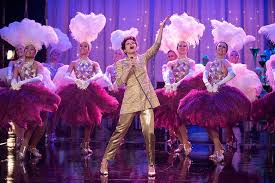 I never knew that ‘Over the Rainbow’ and Judy Garland were a part of Human DNA.

Judy is available on DVD and Blue-ray