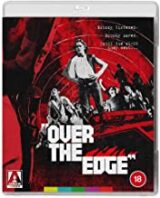 Welcome to the isolated planned community of New Granada, east of Denver, Colorado, where you see the wasteland that is the only thing to entertain the youth of New Granada. Over the Edge is based on the true life experiences of the youth of the late 1970’s. Wherever you were based this was the situation in 1979, Anarchy was king and director Jonathan Kaplan (Project X, Unlawful Entry, Brokedown Palace), takes us straight to the boredom that is opportunity, the opportunity to imagine.

I ONLY GOT ONE LAW: A KID WHO TELLS ON ANOTHER KID IS A DEAD KID

Wasteland, dirt, sunshine, mix them all together, and you see New Granada, a place where there is the separation of those who have and those who are not so well off, with condo’s on one side and the posh houses on the other. But they all have one thing in 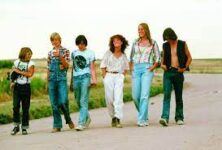 common. The kids have nothing to do, except to go to ‘the Rec’. Run by Rec counsellor Julia Vogel (Julia Pomeroy), one of the problems is that it closes at 6pm. These kids are a product of their time, with the drugs of the day readily available for bored minds.

pair of them end up down the police station because Ritchie has a switch-blade on him. To Ritchie this is a normal occurrence but Carl has to keep a clean sheet as his parents Fred Willat (Andy Romano, Under

Siege, Eraser) and Sandra (Ellen Geer, Clear and Present Danger, The Visitation) are prominent in the area. Fred runs a Cadillac dealership in New Granada and he has ideas for the wasteland that promises to become a drive-in-cinema and a skating rink, but Fred thinks an industrial park would serve the community best.

Over the Edge is a coming of age film with the direst of consequences, and the journey is far more important than the destination, Boredom, lust and drugs this is how it was back in the day. Over the Edge is one of those films that define an era and predicts the future of youth within a society. A must-watch for cinephiles of any age, it was overlooked when it was released, but now it has a second chance to shine.

Over the Edge is available on Blu-ray