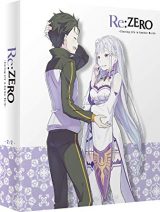 Masaharu Watanabe (Naruto: Shippûden) directs this popular manga and light novel series by (Tappei Nagatsuki, Isekai Quartet) and brings it to life. All The Anime have created a collectors edition containing a 52 page booklet as well as two Blu-rays.

Subaru Natsuki used to sit in his bedroom playing computer games and generally having nothing to do with the outside world, but one night after visiting a convienience store he is whisked away to another world where he is cursed by a witch. He befriends a half elf Emilia who looks

exactly like the despised white witch that has caused countless deaths by her creation the White Whale. Subaru has lived many lives due to the witch curse “Return by Death” where upon death he respawns at certain points in his past. No one around him is any the wiser, with this one ability he must save those he loves and those who love him.

to the capital for the royal selection, where several young women put themeselves up for candidateship to rule the land. Emilia is one, along with Priscilla, Crusch, Anastasia and Felt. Subaru being brash declares himself as Emilias Knight which does not go down well with the real knights

of the realm. Especially Julius Euclius who shows Subaru how a knight deals with a fool, so much so that Emilia will have nothing to do with him and she heads back to her mansion while Subaru recovers from his injuries under the care of Wilhelm, while Felix advises him to make up with Emilia.

Rem feels something is wrong at the mansion and against everybodies advise he goes to the mansion, only to find the village’s inhabitants all slain and the same

How can he save the woman he loves and all the villagers that cared for him earlier in this new world. Well of course he has to die.

He’ll have to deal with wierd witch cultists, the White Whale and sabotuers as well as his grief and when you die that many times it’s got to do something to the mind.

With his own death as a weapon, how will Subaru Natsuki prevail?

RE: Zero Season Part 2 is available on Blu-ray