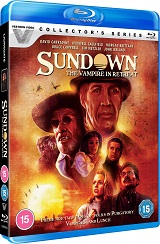 Sundown: The Vampire in Retreat was originally released in 1989, written by John Burgess and Anthony Hickox (Wax Work, Hellraiser III: Hell on Earth) who also directs. It is presented here on Blu-ray as part of the Vestron Collector’s Series courtesy of Lionsgate UK.

David (Jim Metzler – Children of the Corn III: Urban Harvest) is the designer of a revolutionary new process for the manufacture of artificial blood plasma. 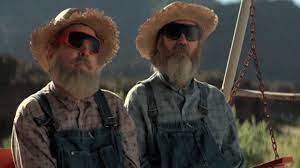 A large scale operation is being set up in the remote desert town of Purgatory and he has been summoned to assist. Viewing it as an opportunity for a nice trip away, he takes his wife Sarah (Morgan Brittany – Dallas, The Love Boat) and children Gwendolyn (Vanessa Pierson) and the vampire obsessed Juliet (Erin Gourlay) along for the ride.

The town of Purgatory is not all as it seems however, their new neighbour Mardulak (David Carradine – Kill Bill, Bound for Glory) is in fact an ancient and powerful vampire, now seeking to live a quiet life. He has set the town up as a colony where his followers can live without harming humans. Using new technologies such as sun screen and UV protective glass, they are able to hide in plain sight, feeding on their artificial blood.

There is another faction growing in the town led by Jefferson (John Ireland – Red River, Spartacus) who believe that vampires should live as vampires and a civil war is brewing as they prepare to revolt. Throw into the mix a descendant of Van Helsing (Bruce Campbell – The Evil Dead, Bubba Ho-Tep) hell bent and destroying all vampires and Sarah’s ex Shane (Maxwell Caulfield – Grease 2, The Real Blonde) and chaos is sure to ensue. 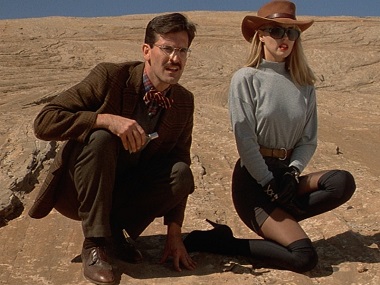 Sundown: The Vampire in Retreat is a proper eighties film, full of boundless enthusiasm and with an eye watering cast of seasoned actors, almost every face is familiar. There is a lot of gore, most of which is produced almost casually and it oozes comedy as well as blood.

In spite of all my better judgement I was hooked from start to finish, it’s a great idea for a story and although there are some glaring pot holes it is really good fun. 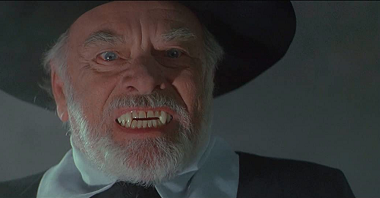 The special effects are hilarious, especially the glorious transformations of the vampires into bats, who fly around chatting to each other and miraculously redevelop clothes when they get to their destination. One of the more entertaining vampire films out there and well worth adding to your collection.

“We are special, we are hunters, we kill.”