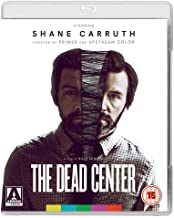 The Dead Center is written and directed by Billy Senese (Closer To God). It is presented here courtesy of Arrow Video.

“I am the mouth of death. None are beyond my reach. Forgive me.” 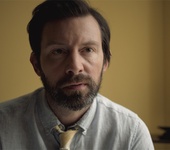 Daniel Forrester (Shane Carruth – Upstream Color, Primer) is a troubled psychiatrist, working in an acute care psychiatric ward. His need to help everyone who comes in and his tendency towards emotional attachment has led him to conflict with his boss and friend Sarah (Poorna Jagannathan – The Night Of, Delhi Belly), who has started to supervise his work. 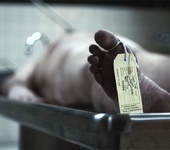 In the morgue of the hospital lies a body with the wrists slit, an obvious suicide with a John Doe tag on the toe. Has a mistake been made? The body sits up, screams and runs out of the room, finding a bed to sleep in. This is where he is found the next morning by a nurse, in a catatonic state. His disappearance from the morgue causes something of a stir and Edward (Bill Feehely – Blood Rogues) from the coroner’s office is dispatched to investigate.

The unidentified man, who will later turn out to be Michael Clarke (Jeremy Childs – Preacher, Nashville) is suffering from amnesia and has no idea how or why he arrived at the hospital. 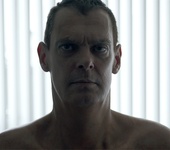 He is sent to the psychiatric ward, where he is checked in by Daniel without his consent. He is determined to get through to his mysterious patient, but his perseverance leads to some disturbing revelations. The man claims that he died and brought back something terrible with him.

When a series of gruesome deaths rock the ward, Daniel begins to wonder whether he might be telling the truth when he claims evil has been unleashed. 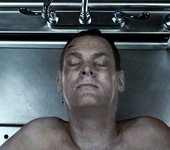 The Dead Center is a very well written and directed film, using a number of interesting techniques to make you feel as disorientated as the patient does. The acting is good and there is no shortage of atmosphere.

There are a few decent jump scares and it is an excellent psychological thriller which keeps you on the edge of your seat and guessing right through to the shocking conclusion.

“Now it’s showing me the things it’s gonna do. When I killed myself I think I made it stronger.” 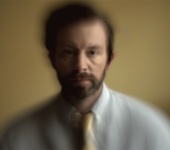 The Dead Center is available to buy now on Special Edition Blu-ray and DVD.