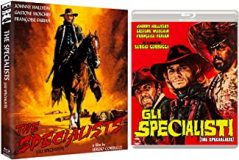 A Town, Money, and a Vengeful Gunslinger.

From Eureka Classics comes a true Spaghetti Western from renowned writer/director Sergio Corbucci (Django, The Hellbenders, Shoot First… Ask Questions Later) who stamped his mark on this genre throughout the  1960’s and 70’s. Now for the first time it is available on crispy Blu-ray courtesy of Eureka Classics. See Special Features below. The Specialists was never meant to be released in English-speaking countries which makes the dubbed version of the film the weakest experience.

The Wild West, Nevada and a stagecoach headed for Blackstone is being held up by the notorious Mexican bandit gang run by El Diablo. El Diablo’s

lieutenant Romero (Remo De Angelis, I Want Him Dead, The Tough and the Mighty) is in charge this day as he fleeces the occupants of the Stagecoach and makes the four young hippies grovel in a dung pile for the chance to live.

But what these bandits didn’t bank on was the appearance of notorious gunslinger Hud Dixon (Johnny Hallyday (as Johnny Halliday), Money Money Money, Man on the Train, Where Are You From, Johnny?) who is the only non-bandit with a gun, due to Blackstone’s Sheriff Gedeon (Gastone Moschin, The Godfather: Part II, All My Friends Part 3) banning all guns in the region. But Hud is out to find those responsible for the unjust killing of his Brother Charlie.

Charlie died allegedly because he had stolen the local banks money transfer to Dallas. The problem Blackstone has is that the money was never found and with the suspect dead there is little chance of Virginia Pollicut (Françoise Fabian, My Night with Maud, Expulsion of the Devil) getting the money back into her bank.

With the news that Hud is in the area, the pacifist sheriff goes to have a word with the armed gunslinger and takes his pistols off him as they ride into town, but not everyone is a law abidin

g citizen as shots ring out in Hud’s and Gedeon’s direction. Hud hasn’t got a reputation as a gunslinger for nothing as he grabs the sheriffs’ six iron and fires back with devastating results.

The Specialists, is a true Spaghetti Western and a must for fans, now that it is on Blu-ray. With great action taking place in the most beautiful vista’s.

The Specialists, is available on Blu-ray