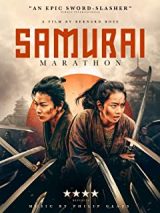 Writer/director Bernard Rose (Anna Karenina, Frankenstein) started out making videos for the likes of UB40 and Frankie Goes to Hollywood and went on to direct one of our all time horror faves Candyman. This time he tells the story of a Japanese event, that has lasted to this day. The Japanese Marathon.

For two hundred and sixty years Japan has been shut off from the outside world, but now the imperialistic Americans are knocking on their door and it is about to change everything that the Shoguns hold dear. Commodore Perry (Danny Huston, 21 Grams, The Aviator, Wolverene) is tasked with first contact, He and his Black Ships arrive and he comes bearing gifts, Bourbon, a telegraph machine, a camera and a set

of Colt 45.’s (Peacekeeper’s) as a gift for the emperor. There is a slight problem with the language as the only other language the Japanese speak is Dutch.

Katsuakira Itakura (Hiroki Hasegawa, Attack on Titan, Shin Godzilla) witnesses these new weapons and is shocked to the core, he is the Lord of Annaka Castle and his daughter Yuki is an artist who is fascinated by the adventurers from across the seas, but her father burns her painting of the black ships and the Americans landing on their sovereign land, he wants her married off as quick as possible to have an heir to his land.

First Shogun Lord Tokugawa is a very suspicious man like those that have come before him, he has placed spies within all the Lords, in the form of Ninjas. Jinnai Karasawa () is an accountant with a secret to hide just like his forefathers. He is an accountant that has sworn to never, excel, stand out, get drunk or Fail! His job is to send letters if he suspects any form of dissent or rebellion to the capital Edo, where the first Lord Shogun will act swiftly on the letter.

But the status-quo is upset when Lord Itakura wakes from a nightmare involving the Peacemakers, and decides that his Samurai and his foot soldiers must be battle ready for the invading Americans. So he gathers them by sounding the drum.

Jinnai immediately thinks there is sedition in the air and he runs to send a letter to Edo. But the Lord wants to test his men in a Thirty six mile marathon and the winner will get a wish granted any wish.

Meanwhile Yuki uses this distraction to make her escape, by cutting her hair and slipping out while everybody is distracted.

“Mercy will cost you!”

What ensues is a roller-coaster ride of endurance, deception, honour and redemption. A martial arts film with the twist of fate, that will keep you engrossed all the way through. 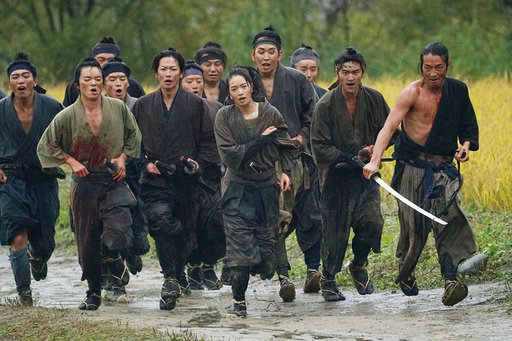