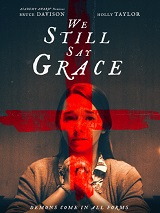 We  Still Say Grace is written and directed by Brad Helmink (The Lodge) and John Rauschelbach (Paradox).  A well used premise, but nevertheless a solid well put together thriller. It is available to stream from 3rd May 2021 on digital platforms including Amazon Prime.

“God has always been good to us in this hard world, isn’t that right girls? And he has always said to me there would come a time when I would have to bring you, my flock, and deliver you unto him.”

Maggie (Holly Taylor – The Americans, The Witch Files) is a teenage girl, living with her family on a remote homestead miles from anywhere. Her father Harold (Bruce Davison – X-Men, The Crucible) is fanatically Christian and demands absolute obedience and devotion to both himself and The Lord.

As the film opens we see Maggie, her sister Sarah (Rita Volk – The Hungover Games, Faking It) and mother Betty (Arianne Zucker – Days of Our Lives) about to take communion wine with Harold, he’s asking do you trust me? They say they do and as it happens this was a bad idea as he announces that the wine is poisoned and they are about to meet God.

On this occasion it was just a test run, not really poison, but his intent is now clear, this is a suicide pact involving the whole family. Maggie is understandably a bit skeptical about this idea, she has never even left the homestead.

Their secluded existence is threatened one day when a car breaks down not far from their home. Three friends, Fisher (Dallas Hart – Greenhouse Academy). Randy (Frankie Wolf – Chance) and Luke (Xavier J. Watson – Momentum) were travelling across America when they made the decision to take a short cut.

This took them close to Harold’s homestead where they suddenly suffered two flat tyres. They ask for help from Harold and he appears to be giving it, however he expects them to adhere to his rules, doesn’t have a phone and seems to keep finding reasons for them to stay. As Maggie takes more and more interest in Fisher, and the boys question Harold’s’ authority, tensions grow and dark secrets spell trouble for everyone.

We Still Say Grace is an entertaining if uncomfortable watch. Although it doesn’t really bring anything new to the party, it is well written with good acting performances from all concerned. It’s a slow burner, but there is a pretty nice twist and it certainly makes you think about the benefits or otherwise of adhering too strongly to religious texts without any form of modern context.

A good watch and well worth a stream for fans of the genre.

“I was thirsty and you gave me drink. I was a stranger and you welcomed me.”

We Still Say Grace premieres in the UK on 3 May 2021 courtesy of 101 Films and is now available to stream on Digital Platforms.