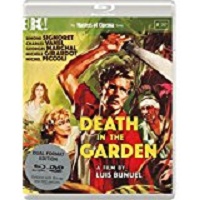 Eureka brings us #167 in their Masters of Cinema series with Luis Buñuel‘s (The Exterminating Angel) look at corruption and revolution. Set in South America in the mid 1950’s where the big man preys upon the small man. Great stuff.

A group of about two hundred men work the mountain river panning for the riches it carries, they toil hard and long for their dreams of what may come in the future. Fortunes can be made and dreams can be dashed upon the rocks that they sweat upon. This happens when the soldiers turn up and they tell the prospectors that the government is taking over their claims and they have just twenty four hours to clear their equipment and move out. 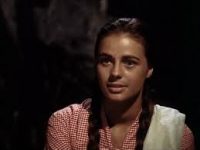 Friends Castin (Charles Vanel, The Wages of Fear), Chenko (Tito Junco, Victims of Sin), Álvero (Raúl Ramírez, The Rattlesnake) and Alberto (Luis Aceves Castañeda, Mexican Bus Ride), complain about this decree and rally the rest of the prospectors to head for the nearby town. Castin is a pacifist and all he wants to do is go to Marseilles and open a restaurant with his deaf and dumb daughter Maria (Michèle Girardon, The Seven Deadly Sins). The group gather outside the soldiers headquarters and demand to see the Captain.

The Captain is playing chess with his lieutenant who he sends out to talk to the crowd. He tells them that if they hand in their guns they can see the captain. But the prospectors don’t want to hand in their guns as they believe they will be shot by the corrupt government. As they won’t give up their weapons the Captain will not do business with them and he has his men fire a warning volley which disperses the crowd.

with his horse in tow. The guards shout at him but he gives them a simple reply.

Later he is in a local bar where he asks the barman if there is somewhere he can find a bed and he is directed to the other end of town where he should find a bed, if the price is right. He doesn’t get an answer at the door, but he really wants to sleep in a bed tonight so when he spots a bed through a window, he decides to go in. He puts some money on the bedside table and enjoys the softness of the bed. 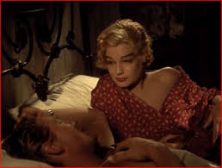 When he wakes, there is someone beside him, Djin (Simone Signoret, Room at the Top) the bed owner, who usually rents her bed out at an hourly rate.

During this encounter Chark proves that he can pay for the services he is using. This is what gets him in trouble with the local authorities as he is carrying a large sum of money and they believe it came from a local bank that was robbed by foreigners recently.

This is just the start of a trail of events that see a pacifist, an adventurer a priest and a whore flee for their lives as the big man blames them for starting a rebellion against their oppressive behaviour.

They will struggle, they will face fear, they will face their own doubts and they will face madness. This is an ace film, that I would never had seen unless I was a reviewer. Now that you know that it is out there, you really should own it. (No Spoilers)

Death in the Garden is Available on a Dual-Format Edition.