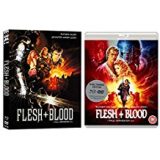 Swords, Religion and the Plague.

Eureka Classics brings us the underrated (at the time) tale of a band of mercenaries wronged by a ruler of a European kingdom. Directed by the Paul Verhoeven, who brought us some of the 90’s most classic films (RoboCop, Total Recall, Basic Instinct, Starship Troopers). This is his first English speaking film, but it still follows in his trademark style of strong bloody violence.

The opening of the film tells us that we are in Western Europe 1501 and things are not rosy, as Arno lfini (Fernando Hilbeck, The Living Dead) was kicked out of his city. Now he wants back in and he has his army and a band of mercenaries lead by the charismatic Martin (Rutger Hauer, Blade 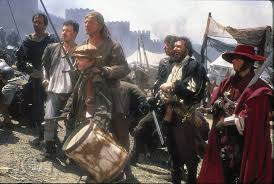 Runner, Sin City, Eureka, RPG). Arnolfini promises the mercenaries 24 hours of plundering if they manage to take the city. Martin and the Commander of the troops Hawkwood (Jack Thompson, Star Wars: Episode II – Attack of the Clones) prepare to take the city. This is when Steven (Tom Burlinson, The Man from Snowy River, Return to Snowy River), Arnolfini’s son who is studying to be a scholar comes up with a siege machine for the troops , but it doesn’t quite go to plan. So Charge.

With close hand to hand combat, the streets soon run red with blood until the

city surrenders and the looting and pillaging can begin. They are very efficient at it, which displeases Arnolfini greatly and he orders Hawkwood to round them up and get rid of them. 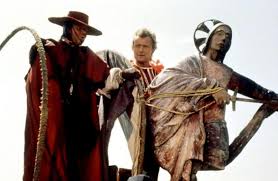 with his men pushing a massive barrel of ale, they follow it to have free drinks for all.

Now Martin and his band of followers including the woman that is supposed to be bearing his child, Celine (Susan Tyrrell, Powder) are marched out of the city minus their weapons and loot, as Arnolfini needs the money to pay off Hawkwood for his deeds to him.

Down trodden and soaking wet they stop at a derelict church where Celine goes into labour. Unfortunately it is a still birth and they must give the baby a burial. During the digging of the grave the Cardinal come across a statue of a Saint,

Saint Martin to be precise and the Cardinal proclaims it as a sign that Martin must be their leader and they follow Saint Martin for their quest for riches and revenge.

Meanwhile Arnolfini has arranged the marriage of his son Steven to the young and wealthy Agnes (Jennifer Jason Leigh, The Hateful Eight, Road to Perdition), which Steven isn’t impressed with until he meets her.

That is when everything gets interesting, especially when you add in mandrake.

With plenty of blood and bare flesh this is a feast for the sword fighting fans.

A great Rutger Hauer classic and a must have for any fan of his, now that it is on Blu-ray.

DUAL FORMAT SPECIAL FEATURES
• Limited Edition O-Card slipcase (first print run only)
• 1080p presentation of the film on Blu-ray, with a progressive encode on the DVD.
• Uncompressed LPCM audio (on the Blu-ray
• Optional English subtitles for the deaf and hard-of-hearing
• Audio commentary by director Paul Verhoeven
• Paul Verhoeven in the Flesh (21 mins)
• Verhoeven Versus Verhoeven – A documentary on the iconic director, covering the entirety of his career and featuring extensive interviews with the man himself (45 mins)
• Audio interview with actor Rutger Hauer (24 mins)
• Interview with screenwriter Gerard Soeteman (17 mins)
• Interview with composer Basil Poledoris
• Original theatrical trailer
• A collector’s booklet featuring new writing on the film (first pressing only)