4 stars for this emotional rollercoaster of a road trip. 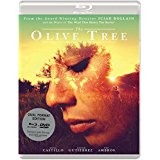 The Olive Tree is written by Paul Laverty (I, Daniel Blake, Even the Rain) and directed by Icíar Bollaín (Take My Eyes, Mataharis). It is presented in Spanish, with English subtitles.

The film tells the story of troubled young woman, Alma (Anna Castillo – Ghost Graduation, Blog), who works on her family’s chicken farm. Like so many other families in Spain, they have fallen foul of the country’s economic crisis. 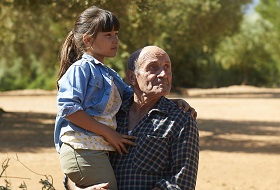 Many families have sold off their ancient olive trees to make ends meet and hers is no exception. Unfortunately, the olive tree they sold ten years previously belonged to her Grandad, Ramon (Manuel Cucala). He was dead set against it, as the tree was 2,000 years old and he considered it to be sacred.

As a child, Alma and her Grandad shared a close bond, both with each other and with the tree, which they imagined had a monster living within, and despite their best attempts, they couldn’t save it. 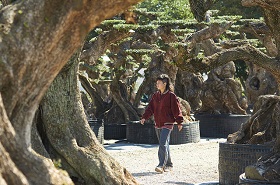 As a result, he hasn’t spoken since and not even Alma can get through to him.

With his health failing, she makes a decision. She will track down the tree and bring it back  to him. This becomes ever more difficult with the discovery that the tree is now in Dusseldorf, pride of place in the lobby of a major energy company, even being used as their logo.

With the help of a few white lies and her friend Wiki (Maria Romero) she convinces her Uncle Alcachofa (Javier Gutierrez – Marshland, Assassin’s Creed) and friend and would be suitor Rafa (Pep Ambros) to make the 1,000 mile trip to Dusseldorf with her to retrieve the tree. 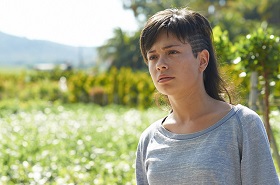 The Olive Tree is a beautiful film. The story is heartwarming and a true insight into the lengths to which people will go for those they love and to save family relationships. It also takes a good hard look at society as well as environmental issues. Although the story is far fetched, it is nice to imagine it could be true and that is where much of the charm lies.

With a really well written and passionate script, backed up by excellent acting, this film is well worth adding to your collection.

“It’s like a lost child isn’t it? The worst part is not knowing.”

The Olive Tree is available to buy now on Dual Format DVD and Blu-ray.