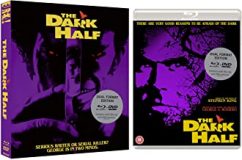 The Dark Half is based on the novel of the same name by Stephen King (Castle Rock, Pet Sematary, Cujo). It features a screenplay written by George A. Romero (Night of the Living Dead, Monkey Shines), who also directs. It was originally released in 1993 and is presented here on Dual Format DVD and Blu-ray courtesy of Eureka Classics.

“It’s essential. The writer has to let that inner being out of the lock-up. He has to let it have a voice in his work, otherwise the work itself will be inhibited, timid, without passion.” 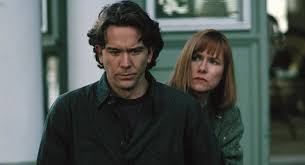 Thad Beaumont is an aspiring young writer, however he has a problem. He suffers from headaches and hears the deafening sound of birds. The doctors suspect a tumour, but when they open up his skull they make a shocking discovery. There is an eyeball looking back at them, the remnant of a twin. At the request of his parents, the twin is removed and buried in the family plot and Thad is able to get on with his life. 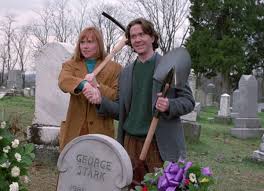 23 years later and now Thad (Timothy Hutton – The Haunting of Hill House) is a professor and author. His books are academic and well respected but not necessarily very popular. To ensure a good standard of living, he creates the alter ego George Stark, a vicious and uncaring man, totally unlike Thad himself, who writes best selling and gruesome thrillers.

When someone threatens to reveal his identity, he and his wife Liz (Amy Madigan – Grey’s Anatomy, Field of Dreams) decide to go public and kill off the persona of George Stark, even setting up a fake grave. However, soon after a series of violent crimes begin and all the evidence points to Thad. Local sheriff Alan Pangborn (Michael Rooker – Slither, Guardians of the Galaxy) investigates, but only Thad suspects the truth. Could George Stark be real? 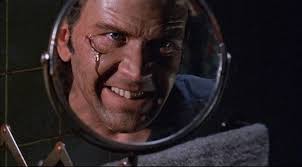 The Dark Half is an extremely enjoyable film to watch. It is a great adaptation of an excellent book with good direction and acting performances. There is plenty of graphic and bloody violence as well as lots of tension. It is a little disappointing that there isn’t more explanation about the twin, how did it come to life, does it have a backstory? In the end though, it doesn’t really matter.

This is a great package, loaded with special features and well worth adding to your collection.

“The sparrows are flying again.” 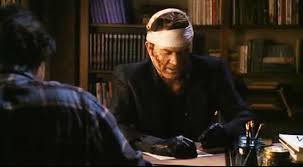 The Dark Half is available to buy now on Dual Format DVD and Blu-ray and will be released on 14th Oct 2019.