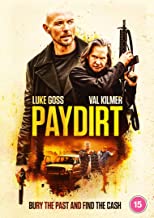 Guns, Drugs and a Payday.

Writer/director Christian Sesma (Vigilante Diaries (TV Series) (7 episodes), Vigilante Diaries) brings us another of his gangland payback films, in the guise of Paydirt. With more Hollywood A Lister’s as the pulling power for this film.

Paydirt starts five years ago, in the middle of the night people with large machinery are in the middle of the desert trying to dig up buried treasure. The treasure is Cartel money, $33 million to be precise and it is all connected to The Brit Damien Brookes (Luke Goss, Blade II, Hellboy II: The Golden Army, Tekken) who was in the wrong place at the wrong time as Sheriff

Tucker (Val Kilmer, Top Secret!, Willow, Batman Forever) is on the drugs war path and he is leading a raid on a car wash (obviously). Shots are fired and people die and at the heart of it is Damien. Arrested and he is sentenced to five years, but as he has to assert his authority, it is extended to six.

But apparently all the drugs only amounted to ten pounds, not the scoop that Tucker was hoping for and due to the shootings he is fired from the force (which he is so happy about, not).

Six years later Damien is out and he wants his paydirt for his time and he wants to put his old crew together to get it. With The Braun Tony (Paul Sloan, Stiletto), The Brains Geoff (Mike Hatton, Shoot the Hero), The Babe Janel (Murielle Telio, The Duff) and The Badass Cici (Veronika Bozeman, Boy Bye) they have a plan to deal with the Cartel but first Damien must be a good boy and keep his parole officer Layla (Mirtha Michelle, Fast & Furious) happy and find a job.

But what they all want is to put their feet up and enjoy being rich, good luck on that one.

The best thing about Paydirt is Luke Goss, essentially this is an eighty-minute music video interrupted by boring dialogue. Only for the fans.

Paydirt is available on DVD