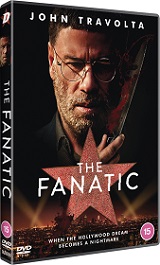 The Fanatic is written and directed by Fred Durst (The Education of Charlie Banks) of Limp Bizkit fame. It has the definite feel of something written through experience, the whole thing feels very personal, unfortunately almost like a vendetta against autistic people and possibly even fans in places.

“Ghost train is too typical. I need something rememberable…” 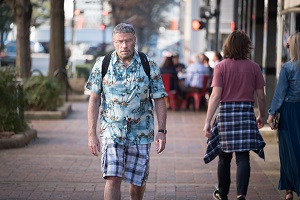 Moose (John Travolta – Pulp Fiction, Face/Off) is an autistic man living in Los Angeles. He spends his days riding around the streets on his moped and earns his keep working as a street performer on Hollywood Boulevard playing an English policeman, near to professional con artist Todd (Jacob Grodnik – Tiger, Dear Dictator) and his sidekick Slim (James Paxton – Bit, Low Tide), both of whom bully him incessantly. 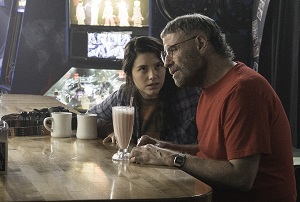 He is an avid film fan, obsessively collecting autographs with the help of local shop owner Aaron (Josh Richman – Kiss Kiss Bang Bang) , who tells him that his hero Hunter Dunbar (Devon Sawa – Final Destination, Casper) is due to sign autographs at that very store. He buys an expensive jacket worn by his hero in one of his films and turns up to the signing full of anticipation.

His hopes are dashed however when Dunbar’s ex wife shows up out of the blue and he calls it all off just as Moose is next in line. Angry and upset, he turns to his paparazzi friend Leah (Ana Golja – Full Out, The Cuban) to find out how she locates the homes of celebrities, why alarm bells didn’t start to ring at this point is anybody’s guess. 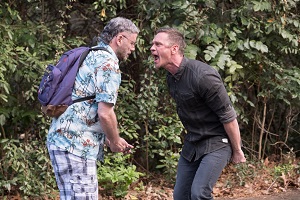 All he wants to do is write him a letter and deliver it in person, but it goes badly (as you would expect) and Dunbar threatens Moose. He fairly quickly shifts from avid fan to stalker and things degenerate quickly from there, changing both their lives forever.

The Fanatic is certainly a thought provoking film, although perhaps not in the way it was intended. It is incredibly cruel and cold and it’s very difficult to feel affinity with any of the characters, they are all too flawed. John Travolta’s acting is excellent but sometimes a little too good, making it awkward to watch. I also found the hair style to be a step too far, it’s just ridiculous, he looks like a walking cliche. 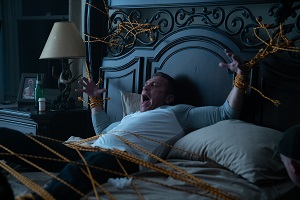 Although getting off to a good start, it all goes downhill somewhat in the second half, growing progressively less believable as it goes on (someone would surely notice a dead woman lying in the middle of the garden, however unobservant they are). The narration seems to be an attempt to put a human face on the madness and gratuitous violence, which doesn’t really work.

It’s not a bad film, it’s watchable and interesting and fans of John Travolta will almost certainly not want to miss this performance, however it’s not one for the faint hearted or easily offended.

“Everything breaks down eventually, even a person’s spirit. But Moose, he’s unbreakable.”

The Fanatic is out now on Digital Download and will be released on DVD and Blu-ray on 20th July 2020.