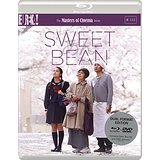 Sweet Bean is based on the novel by Durien Sukagawa (Kinpatsu Sensei) and written and directed by Naomi Kawase (Still The Water). It was selected to open the Un Certain Regard section at the 2015 Cannes Film Festival and was also selected to be screened in the Contemporary World Cinema section of the 2015 Toronto International Film Festival.

This Dual Format Blu-ray and DVD is brought to us by Eureka Entertainment as part of the Masters of Cinema Series #153.

“All I ask is that you make the bean paste.” 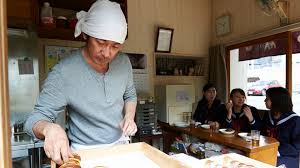 His shop is mostly frequented by local school kids, Wakana (Kyara Uchida – I Wish) and her friends, however even they aren’t that keen on the food.

Everything changes for Sentaro one day when a strange old lady turns up at his shop looking for work. At aged 76, she tells him that she has always fancied this kind of work. Sentaro takes one look at her disfigured hands and turns her down, fearing the work will be too much. 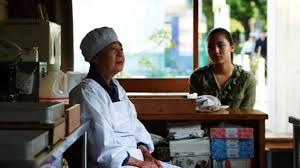 Tokue (Kirin Kiki – Returner, Still Walking) is not easily deterred and returns shortly with a sample of her home made An. As soon as Sentaro tastes it, he realises that she has a gift and decides to hire her to produce his bean paste rather than buying it in.

Tokue begins to teach him how to treat the beans, the required levels of respect and how everything relates back to nature and he continues to make the pancakes. As expected, the shop’s fortunes begin to turn and things are looking up, however all is not as it seems and soon everyone will find themselves facing some pretty harsh but ultimately very useful life lessons. 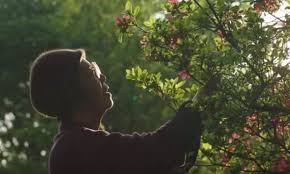 Sweet Bean is beautifully written, gentle and slow paced, but full of wonder and innocent joy in the simple things in life. The camera work and acting are also amazing, lending a refreshing and clean feel to the whole film. As much about life as cooking, it gives a disturbingly honest view of how it feels to live on the periphery of society, and the discrimination which causes these people to back away from the world.

An amazing film, well worth adding to your collection and very powerful, just make sure to have plenty of tissues available as this is a real tear jerker (in a good way).

“An is the soul of a Dorayaki. How could you treat it so lightly?”

Sweet Bean is available to buy now on Dual Format DVD and Blu-ray.