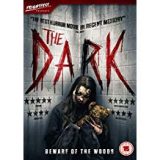 The Dark is written and directed by Justin P. Lange and is his impressive directorial debut.

It is the first film to be released under the FrightFest Presents label, the new venture from leading independent distributor Signature Entertainment and leading genre festival FrightFest.

“This is what you’re looking for. So you like scary stories do you?”

Josef Hofer (Karl Markovics – End of the Season, Fog in August) is a man with secrets. As the film opens, we see him pull into a roadside shop for some supplies and a map of the local area. The purchase of Rainbow Hoops is suspicious as he seems to be alone and this is not lost on the shopkeeper.

Josef is (for reasons never explained) heading for local landmark Devil’s Den, reputedly stalked by a monster, who consumes anyone who strays into her territory. Unfortunately for him, the TV chooses this moment to announce that Josef is one the run and things take a turn for the worse. 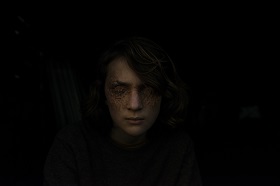 As Josef heads into Devil’s Den, his tyre is punctured by a barbed wire trap and he heads for a seemingly abandoned house. When he meets his end inside at the hands of undead young woman Mina (Nadia Alexander – Blame, Seven Seconds) the reason for his secrecy is revealed, concealed within the boot of his car is a young kidnap victim, Alex (Toby Nichols – Iron Fist, Desolation).

He has been brutally blinded by Josef and is suffering from Stockholm syndrome having been with him for so long. Mina, who was herself the victim of a brutal murder, finds an affinity with him and attempts to protect both him and her own little world. 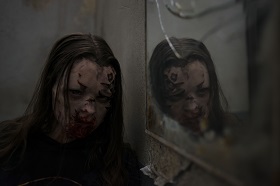 The Dark is an enjoyable film to watch and offers a very interesting take on the zombie movie genre. The acting performances are superb and the script is also pretty good and the characters unexpectedly relatable given their circumstances.

Although slow moving, this is a good thing and works well for this peculiar blend of blood and gore and psychological horror. It is a poignant story as the two teens struggle to come to terms with their respective abuse and begin to change each other in unthinkable ways.

A well thought out film and certainly worth adding to your collection.

The Dark is available to buy now on DVD and Digital Download.