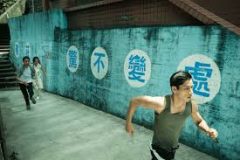 The Sadness is a 2022 Taiwanese zombie horror film, written and directed by first time Canadian filmmaker Rob Jabbaz. Filmed on location in Taipei, where he now lives, this is a truly remarkable debut, he is definitely one to watch.

This Shudder exclusive pushes the limits of what can be achieved in horror and is available to stream now across the streaning service, with English subtitles. Be warned, this film is suitable only for die hard gore enthusuaists.

“I’ll emphasize this again. Our society must take this outbreak seriously. To politicize a virus is a terrible mistake!” 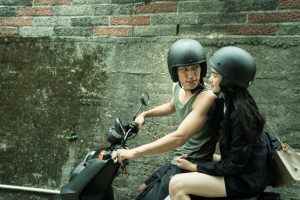 Jim (Berant Zhu – Danger Zone) and Kat (Regina Lei – 76 Horror Bookstore) are a young couple living in Taipei. The country is in the midst of an outbreak of Alvin Virus, a disease which has mild symptoms. However, there are warnings from Dr. Alan Wong (Wei-Hua Lan – High Flash, The Defender) that it has the potential to mutate into something much more dangerous, with similarities to rabies.

Of course, the scientists are robustly ignored, it’s an election year after all, which is why when on their way to work one morning, Jim and Kat notice some very disturbing behaviour. People are attacking each other in the streets in brutal and barbaric acts of violence. 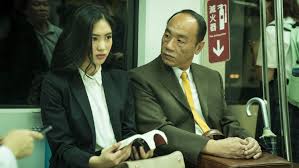 Thinking it’s a one off, Kat heads to work and Jim returns home. Unfortunately, their neighbour Mr. Lin (Ralf Chiu – Happy Dorm) is infected and now psychopathic and homicidal and Jim is forced to flee. Meanwhile on the train, the infected are beginning to run wild and Kat and her new friend Molly (Ying-Ru Chen) find themselves on the run from a crazed business man (Tzu-Chiang Wang – Unsilenced). Can the young couple reach each other across the rivers of blood flowing throught the city?

“Alvin continues to be a very real threat to public health. And it doesn’t care who the president is.” 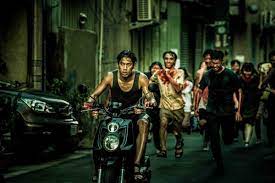 The Sadness is a very effective film and also timely, released in the wake of a pandemic it doesn’t seem all that far fetched. In terms of special effects, they are brilliant, relentless and face-bitingly explicit. This is one of the most brutal films I have seen, even being given trigger warnings at some of the Festivals at which it was shown.

There are scenes of sexual violence as well as extreme depravity, cruelty and torture, with no shortage of adult language. Absolutely amazing and seriously well written, but very much not for the faint hearted.

“There are hostile people, in the streets, all over the place and they seem to be going on a homicidal rampage.”

The Sadness is available to stream exclusively on Shudder from 12th May 2022.