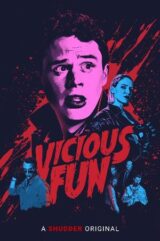 Vicious Fun is written by James Villeneuve (The Ticket) and Cody Calahan  (The Oak Room, Let Her Out) who also directs. Available to stream now on Shudder.com this Shudder original is a fabulous and blood soaked hark back to the golden age of slasher flicks.

“Fade in. The city at night. Rain falls like drops of poison. Nice. Windshield wipers slash like deadly knives. Nice.” 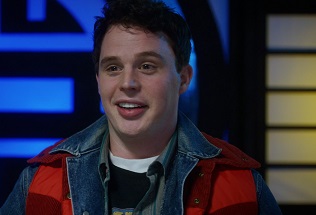 It’s Minnesota and the year is 1983. Joel (Evan Marsh – Workin’ Moms, Shazam!) is a young horror journalist/critic writing for the Vicious Fanatics magazine (or Vicious Fun, as one of the directors he interviews suggests would be a better title). He fancies himself a potential filmmaker, believing he has fresh ideas to bring to the table.

He also has a bit of a crush on his roommate Sarah (Alexa Rose Steele – Degrassi: The Next Generation), unfortunately the feeling is not mutual. Having been booted out so Sarah can have a girl’s night, Joel goes outside only to catch her date putting on a wedding ring as he is about to leave. 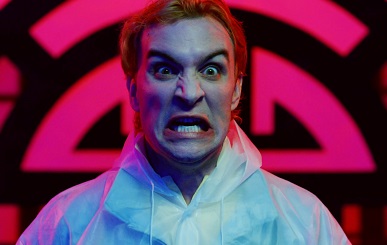 Angry at the betrayal of his friend, he hops into a taxi and tells him to “follow that car!” This takes him into  Chinese restaurant where he introduces himself to her date, who turns out to be a real estate agent called Bob Nice (Ari Millen – Orphan Black, The Expanse), who just uses the ring to make sales. Following a revelation about the way Sarah really feels about him, he gets roaring drunk, throws up and then passes out in the toilet. 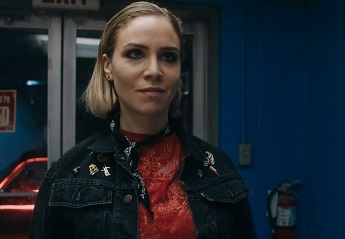 When he awakens, the restaurant is closed but he can hear voices. There is a meeting going on and he is invited to join, mistaken for someone named Phil. Chaired by Zachary (David Koechner – Anchorman: The Legend of Ron Burgundy), the others introduce themselves, Hideo (Sean Baek – Killjoys), Mike (Robert Maillet – Pacific Rim, The Mortal Instruments), Carrie (Amber Goldfarb – Appiness) and Fritz (Julian Richings – Man of Steel, Urban Legend).

“Can you please describe your disposal methods. How do you conceal your actions from people?”

As the meeting progresses it quickly becomes apparent that this is a self help group for serial killers and he is going to have to learn to fit in very quickly if he wants to survive the night!

Vicious Fun is a very entertaining film although certainly not one for the faint hearted. It’s extremely gruesome with lots of entrails and blood everywhere, enough to satisfy horror-hungry gore hounds.

The eighties setting makes a great back drop for this laugh out loud funny and imaginative horror film. With plenty of surprises this one is well worth a watch.

“I’m a taxi driver. I’m like a crocodile. A steel crocodile, on wheels, prowling through the dark asphalt rivers of the city.”