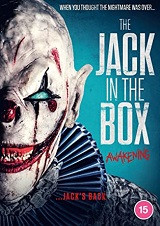 The Jack in the Box: Awakening is a 2022 British horror film written and directed by Lawrence Fowler (The Jack in the Box, Curse of the Witches Doll). It is released on DVD and Digital courtesy of 4Digital Media.

“Sick minded collectors would bleed themselves dry to get their hands on a thing like this. Fortunately, none of them have pockets quite as deep as yours.” 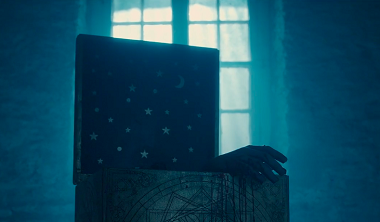 Amy (Mollie Hindle – The Fourth Musketeer) is a young woman recently separated from her boyfriend. In the interests of making a new start she has taken what seems to be a great opportunity working as a housekeeper at a large estate owned by Olga Marsdale (Nicola Wright – The Gardener, Webcast) and her son Edgar (Matt McClure – The Innocent). 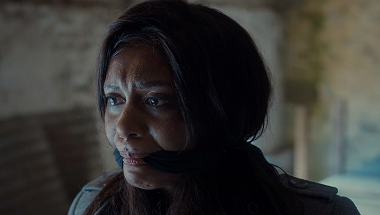 Olga is bed ridden, suffering from terminal cancer. She has a plan however, she has managed to get her hands on a cursed object which she believes will be the key to her survival.  The oldest Jack in the Box ever discovered is rumoured to contain a demon named Jack who can grant a wish in return for six sacrifices.

Olga turns the dial to LIFE and cranks the handle and sure enough, the dealer Mr Huxley (Victor Mellors – The Golden Fleece) becomes the first victim, the dial moves to one and the terrifying Jack (James Swanton – Host, Werewolf Castle) is unleashed upon the world.

This does not bode well for Amy and the other staff, Janet (Michaela Longden – When Darkness Falls) and chef Frank (Jason Farries – Homesick, Last Chancers) who now all find themselves confined to the estate by Edgar. Can they escape before it’s too late?

The Jack in the Box: Awakening is an enjoyable film to watch. It doesn’t really bring anything new to the party, but it’s well made and the acting is passable. Although obviously low budget, the monster effects are impressive and the clown is suitably scary. There is also plenty of blood to satisfy the gore hounds.

There are a few plot holes (why does nobody think to look for a ladder?) but all in all it’s a fun way to spend an hour and a half of your time and well worth adding to your collection.

“We’ll start again. Somewhere so far away from here that no-one will ever find us. We’ve done it before, we’ll do it again.”

The Jack in the box: Awakening is available to buy now on DVD and Digital.