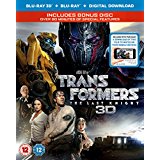 Transformers, Decepticon’s and the fate of the Earth.

Michael Bay‘s (Bad Boys, The Rock, Pearl Harbor) fifth transformers film goes all out in 3D as the Transformers have fallen out of favour even though they fight to save the Earth from the Decepticon’s. Three years after the Hong Kong battle all the countries of the World have outlawed all Transformers and they are actively sought out to be destroyed. Optimus Prime has left Earth in search of his home planet Cybertron, and Cade Yeager is left hiding himself and the remaining Transformers from the newly formed Transformer Reaction Force (TRF).

Let the 3D action begin. It has great depth of field and it is in your room as you dodge the scenery.

England 484 AD in the reign of King Arthur and he and his knights are struggling to battle the Saxons. But Merlin has a belief that he can get help and sets off to find the Knights of Iacon, Twelve Transformers that have taken refuge on Earth. He begs them for aid and they give him an alien staff and turn themselves into a dragon to help against the Saxons, but this staff will come at a cost in the future.

outlaws and the TRF are very active in taking down the rogue robots. They have gone into hiding and our usual crew of Cade Yeager (Mark Wahlberg, 2 Guns, Patriots Day) Bumblee (Erik Aadahl) Hound (John Goodman, Argo, Transformers: Age of Extinction) et al. With new robots crash landing  all over the planet every day the TRF have their work cut out.

alien wreckage scattered throughout the cityscape, a small group of boys want to collect an alien souvenir. In the destroyed streets they come across a downed ship and the alien inside is very old and comes to life

inside his ship and scares them but this alerts the defence robots and they come under fire. They are lead to relative saftey by a young girl Izabella (Isabela Moner, Middle School: The Worst Years of My Life) who has made this area her home and too her robots Sqweeks and Canopy.

The TFR identify Canopy wrongly as a Decepticon and fire upon it even though the children are present. The attack mortally wounds Canopy just as Cade turns up with Bumblebee to save the day.

to give Cade a talisman from the days of Merlin. This is observed by the Decepticon Barricade who reports this to the Transformers arch enemy Megatron.

the Transformers and Dinobots and the cute Mini-Dinobots reside in secrecy.

Deep space and a frozen Optimus Prime drifts through space on a collision course with his home planet Cybertron. He crashes into the remnants of what he and the other Autobots

used to call home, but is nothing like he remembers. Even though the place is deserted he encounters Quintessa (Gemma Chan, Fantastic Beasts and Where to Find Them) who claims that she is his creator, she has a plan to restore the planet to it’s former glory and brainwashes Optimus into retrieving the one thing that can do it and it is hidden away on Earth.

Sir Edmund Burton (Anthony Hopkins, The World’s Fastest Indian) sends his robot ninja butler Cogman (Jim Carter, My Week with Marilyn) to find Cade just as the TRF are on his heels also Edmund summons Oxford Professor
Vivian Wembley (Laura Haddock, Guardians of the Galaxy) to him as well as Cade. Now we have all the elements to save to planet.

You will have a stiff neck after dodging all the debris in this 3D extravaganza.

A must for your 3D collection especially as you get an 80 min bonus disk.

Creating Destruction: Inside the Packard Plant.

The Royal Treatment: Transformers in the UK.

Transformers: The Last Knight is available on Blu-ray 3D and Blu-ray