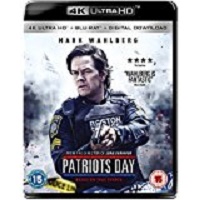 Writer/director Peter Berg (Hancock, Deepwater Horizon) brings us his third collaboration with Mark Wahlberg (Transformers: Age of Extinction, 2 Guns) and his on going love of historical events. He takes on the harrowing task of telling of the events on Patriots Day and around the aftermath of April 15, 2013 in Boston Massachusetts USA. 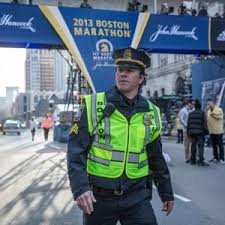 Police Sgt Tommy Saunders (Wahlberg) is in the dog house with the DA and all his co workers think he has been disciplined and suspended. However, as he points out to the two officers with him and as commissioner Ed Davis (John Goodman, Monsters, Inc., Fargo) points out, if he were suspended he wouldn’t be at work hurting his knee kicking a door in. It is now five hours before the Patriots Day marathon through the street of Boston.

Meanwhile the next morning Dzhokhar Tsarnaev ( Alex Wolff, The Sitter) and his brother Tamerlan (Themo Melikidze, Transit 17) are watching videos on how to make bombs and packing shrapnel into pressure cookers.

The film switches between Tommy and the people who get caught up in the atrocity and how their lives will be affected.

Tommy is on duty by the finish line doing crowd control. Now a couple of hours after the race started the runners are posting their times as the crowd cheer them home, when boom! two explosions rip through everybody. (Very Graphic). 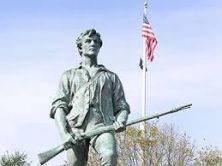 With everything in chaos the emergency services are set in motion with Tommy assessing the scene. Friends and families are separated as they are taken to different hospitals around the city. People have suffered horrific injuries from the ground based bombs. Tommy realises that all cell phones should be collected to search for evidence as well as CCTV.

FBI special agent Richard DesLauriers (Kevin Bacon, Apollo 13, Footloose) is soon on the scene and ascertains that it is terrorism. They take on the case and set up their incident room to recreate as Tommy searches for clues with Watertown Sgt Jeffrey Pugliese (J.K. Simmons, Spider Man).

They will get the perpetrators!

Some people may say it’s too soon, but these events are world wide and the populace need to know that the powers that be are doing everything they can to keep the general public safe and this film does that, in spades.

Patriots Day is available to own on Blu-ray and DVD.