What Would You Do?

It is 1988 and Oh Dae-su (Min-sik Choi, Brotherhood, I Saw the Devil) finds himself in a police station, under arrest for being drunk and disorderly even though it is his daughter’s sixth birthday. He causes quite a fuss and the police have to get his friend Joo-hwan (Dae-han Ji,  Cracked Eggs and Noodles) to come and collect him and get him home.

But on the way home they dodge the downpour and use a phone booth to phone home and tell his daughter he is his way with her present, the wings. Joo says he has to talk to her and they swap places. Oh grabs the umbrella as Joo speaks on the phone and as the camera pans around, Oh is nowhere to be seen.

A steel door with a hatch at the bottom, a foot appears and flicks the catch and opens the hatch. It is Oh Dae-su and he pleads for information as he has been incarcerated in the hotel-like cell for two months now, with no idea why or by whom, but he gets no reply. Just his food which at the time he doesn’t appreciate.

His captors look after him by gassing the room then cutting his hair and injecting supplement and also when he tries to commit suicide. His only link to the outside world is the TV in the room and this is where he finds out that his wife has been murdered and he is the primary suspect, due to his captors collecting things from his cell.

The years roll on and Oh Dae-su plans to exercise and make a bid for freedom by using a spare chopstick to dig a hole in the wall behind his bed, By fourteen years he finally gets a brick out to the outside world. He

reckons within a month he will be out. But as he dreams of freedom his room is visited by a hypnotist who tells him of open green fields and when he awakes he is free and on a roof garden where a man is about to jump off the roof with his dog, Oh Dae-su tells him his life story.

“Mister, even though I’m no better than a beast, don’t I have the right to live, No?”

With a new suit and watch he heads off into the city to find out how and why he was imprisoned.

Laugh and the whole world laughs with you. Weep, and you weep alone.

He feels compelled to enter a sushi bar where Mi-do (Hye-jeong Kang, Kiss Me, Kill Me) works and for some reason she seems to think they have met before but due to the incarceration he thinks this is unlikely. He is hungry for a new sensation after fifteen years of the same food.

“I want something alive.”

But Oh Dae-su’s body can’t handle the real world and he collapses, when he awakes he is in Mi-do’s apartment with her reading about his time locked-up. She has affection for him and he has similar feelings, even if they are raw after his time with the TV. He is taunted left and right by the person that had him captured and Oh Dae-su and Mi-do do their best to resolve his dilemma.

Oldboy is one of the best films to come out of the naughties, copied by Hollywood but not surpassed. This is a visceral experience that takes you through the whole human psyche. The filming is some of the best in cinematic history that draws you in to the plight of our subject. 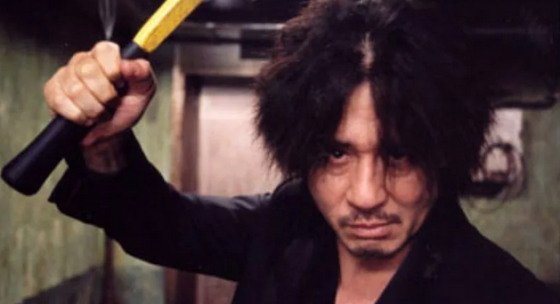