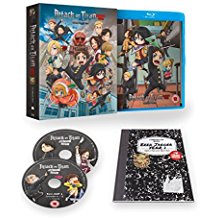 A Fight for Your Right to eat Cheese Burgers.

Production I.G. bring us an adaptation of their super Attack on Titan releases. This full collection of the 12 episodes comes in a collectors box. The only similarity is that the human characters are there and there are Titans. As the name suggests we have High School hi-jinx as the students learn the skills they will need against the Titans.

him and tells him he is late, so he quickly dresses and they rush out of their modern house. This is the first difference from the original Attack on Titan, they are not in a medieval village. They race down the roads and alleys and literally bump into other students Krista, Ymir, Sasha, Jean, and Connie, causing all sorts of chaos.

When they arrive they turn left and head through to the campus, which is huge.

They head for their classroom but the door is massive and eventually they find a smaller door and head inside. They think they are first to arrive as the room is empty and dark. Nothing happens until a huge rubber falls on Eren and then other stationary starts falling all around the students.

They have gone to the wrong school, they are in the Titans half of the school, and when they realise they flee with the Titans giving chase. They are rescued by Hannes, the school janitor. He leads them to their school and they meet their teacher Keith Shadis, who is a strict task master. 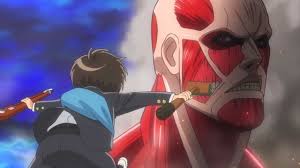 At lunch time there is to be the entrance ceremony for the 104th class but during the proceedings a familiar face appears above the 50 metre high perimeter wall and kicks a hole in the base of the wall letting in the other Titans who start stealing the students’ packed lunches (the theme of this series). This enrages Eren who vows to rid the world of the mighty food stealing Titans and races after the super Titan to retrieve his food.

Now they have to find the skills that they will need to take the Titans down and they will find them at school but just not where they thought. With cleaning duties, burgeoning romances, secret societies and dodge-ball. Great fun. 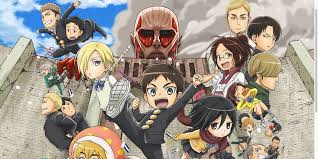 Attack on Titan: Junior High is available on Blu-ray and DVD.