5 Stars as Production I.G. Gobble up the opposition. 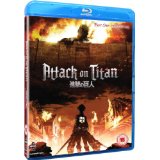 From the superb studio that has brought us such delights as Ghost in the Shell, Psycho Pass and The End of Evangelion, this is the story of the human race under pressure to survive against gigantic odds, as they are the fodder for the Titans that feast upon humans for the fun of it. After retreating behind 50m high walls, humans live their lives as meek, kowtowed, servile people afraid to go outside the walls even though no titans have been seen for a hundred years. 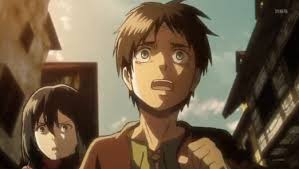 Now it is the year 845 and a young Erin and his adopted sister Mikasa are out collecting fire wood. The scouts return from an expedition outside the walls and Eren says that he wants to join the scouts when he is old enough, even though he can see that they have taken heavy losses. But Eren never sees it that way, he will conquer all. His sister and their mother totally forbid him from joining, but it does impress his father. After rescuing his friend Armin from bullies they are heading home when out of thin air a fleshless titan appears outside Wall Maria, easily ten metres taller than the wall.

Engulfed by steam, the Titan clings to the top of the wall that surrounds the town of Shiganshina. As the inhabitants look on in horror and disbelief, the defence force crumbles due to their inactivity for the last hundred years, more alcoholics than soldiers.

The Titan pulls back his foot and kicks in the huge closing door, sending debris flying all over the town. As everyone runs for cover, the gaping hole in the wall is soon full of hungry giants that stand above the red tiled roofs of the timber framed houses. Houses shatter under the barrage of wall stones and

when Eren and Mikasa get back to their destroyed house, they spot their mother, who is trapped by her legs. They frantically try to free her, but to no avail and when a giant turns up they try harder until city guard Hannes comes and drags them away on their mothers request. As they run headlong into the town Eren sees his mother plucked from the debris and eaten whole by the giant.

Eren swears to kill every single one of the monsters that threaten his world.

With his sister and Armin they travel  further into the walled city, vowing to join the scouts. His sister can only do one thing and joins him, as does Armin. They spend the next 5 years in training under the tutelage of Commander Pixis in how to fight and use the OMD (Omni-Directional Mobile), the equipment of the scouts, allowing them to fly through the streets and woods taking the fight to the Titans as they learn how to permanently take down a Titan.

I’m not going to spoil the story as there are many twists and turns in this brutal lesson in life, you never know who, when or how people are going to die.

Brilliantly animated with stunning backdrops and slick story line, as humans turn from cows to wolves.

Follow Eren and Mikasa as they strive to turn their world around and find out what is hidden in his fathers cellar. 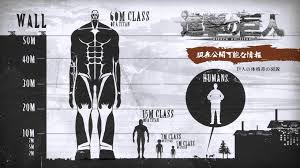 The odds are against you, what will you do?