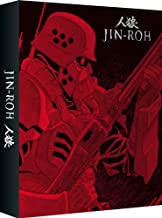 Twenty years from its first release, Key animator and director (this being his first) Hiroyuki Okiura’s (Akira, Your Name., A Letter to Momo, Venus Wars) Jin-Roh: The Wolf Brigade sees itself on Dual Format release from All The Anime LTD. Being a Production I.G (Attack on Titan, Ghost in the Shell: Arise, Attack on Titan: Junior High, Psycho-Pass 3) anime you know you are in for an amazing story and beautiful animation.

Jin-Roh: The Wolf Brigade is set in an alternative time-line where Japan went a different way after WWII, wherein they went big on industrial expanse and created slums and social unrest.

The Urban Police have trouble quelling the riots and the terrorist organisation ‘The Sect” use these riots to cause mayhem in the city. As The Sect work their way through the sewers of the city the crowds above are at a stand-off with the riot police until a young girl appears out of the dark alleys with a satchel. She stands in the crowd until a man takes it off her and heads for the front of the throng. He rushes forward and pulls the wire in the satchel and hurls this at the police. Boom!!!

The girl heads back to the sewers and is given another satchel and she heads off with it while the Sect members pull back to another riot. Running through the water she hears more footsteps that are not the Sects. It is the Special Unit (elite Kerberos Panzer Cops) a heavily armoured anti terrorist unit.

The girl flees as the unit take out the terrorists with gusto, back to the g

irl it is all quiet and she stops for a breather, but it is too quiet and as she turns she sees the eerie red glow of the Units goggles. 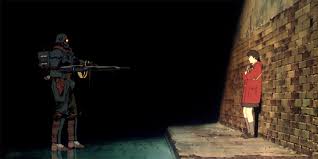 The pair stand there in a stand off, One question from the man “WHY” but the girl says nothing but, she pulls the wire and another Unit member jumps on Fuse just as the satchel bomb explodes in the girls arms killing her instantly.

Fuse miraculously survives with just a concussion and minor injuries. But the muck has hit the fan after Fuse failed to shoot the girl and the effect on the city after the explosion as the Unit were out of their jurisdiction in eliminating a few of the terrorists.

Fuse is brought before a tribunal which decrees that he must retrain, as those in power try to get rid of the Special Unit using Fuse as the scapegoat. But there is always intrigue when people plot and re-plot as rumours of a rogue team nicknamed the wolf brigade aim to destroy the terrorists.

“What big eyes you have… what big teeth you have!”

Fuse’s mind isn’t right as he seeks closure of the events in the sewer and when he meets a young woman who is the terrorists sister things take on a whole new dimension. 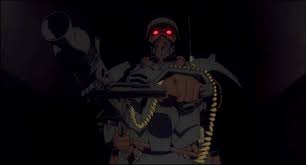 Jin-Roh: The Wolf Brigade is available on Dual-Format.