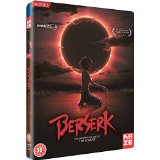 Director Toshiyuki Kubooka brings us his third installment of the Berserk series of films, following the Fortunes and misfortunes of the Band of the Hawk.

Following the victory of Griffith over Guts Guts joined the Hawks, to win the Battle of Doldrey.

After that, Guts left the Hawks, but now he is back as he saves Casca and the Hawks from a night attack by the Midlands forces that have branded the Hawks outlaws and they are to be eradicated.

But the biggest shock for Guts is that Casca informs him that she could not show Griffith her love and this is because the day after Guts left, Griffith was captured by the King of Midlands’ forces and has been thrown in a dungeon within the tower of Rebirth inside Wyndham.

In despair, Casca once again tries to commit suicide by falling off a cliff, but she is caught by Guts who then informs her that she is banned forever from going anywhere near a cliff edge.

This is where the pair change and they come together and make love under a tree, but as Casca sleeps after their coitus, Guts senses something and brandishes his sword and searches the woods as noises come from behind him and the sides until a huge figure on horseback looms out of the mist. 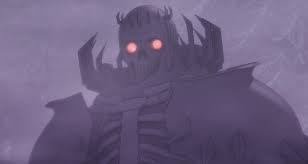 A Skull Knight rides the huge horse and he foretells that an Eclipse event is soon to happen and that Guts should prepare for the hell storm that is about to descend upon him. Then it turns and rides away as the mist starts to disappear and Casca starts to stir.

Griffith languishes within his cell hallucinating with hunger and pain, as he peers out through the holes in his mask. He can’t speak because the torturer has removed his tongue and he will never run or wield a sword as his tendons have been severed in his ankles and his wrists. His body is too frail to even sit up.

Word is sent out to find a way into the tower of rebirth. Eventually they find an insider willing to help. Wary of a trap, the small band enters the crypt of the church to find their accomplice, who leads them into the depths of the tower where there is over a thousand years of history.

After finding the disfigured Griffith they make their escape through the city guards and this is our hit of blood as Guts takes his sword to task as he slices his way up the narrow stairs. As they try to make their way out of the city ambushes have been set.

There is plenty of action and the animation is as slick as it can be and beautiful as the other installments of Berserk.

As we enter the demented mind of Griffith, he dreams of being whole again and the price he is willing to pay for it and when the moon starts to shroud the sun all hell is let loose.