4 Stars of the continuing story of Guts.

With slick animation (drawn and CG) and plenty of blood and gore, as we are swept along in the next instalment in the life of mercenary Guts, 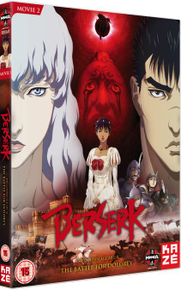 (Hiroaki Iwanaga, Beserk: The Golden Age Arc 1 the Age of the King). After showing his prowess on the battlefield with his massive sword Guts is recruited into the mercenary group The Band of the Hawk, lead by the enigmatic Giffith, (Takahiro Sakurai, Psyren) who is the only person to beat Guts in battle.

The hundred year war continues and the band of the hawk play a pivotal role as they sweep across the battlefields in the Midland war campaign.

The layout of the battles is great, reminding me of the close intense battles of the crusades featured in (Kingdom of Heaven), you feel if you nod your head at the wrong time you might lose it and have a unique view of the battlefields from high above as it goes tumbling through the air. 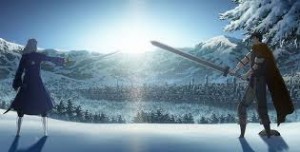 The stumbling block and the creator of this stalemate is the old fortress of Doldrey set in the impenetrable backdrop of a sheer cliff face. No army has ever breached its walls and all have fallen to the fearsome Rhino’s.

In a council meeting Griffith volunteers the Hawks to take the fortress; will they succeed and what will Guts do about Griffith if they survive.

Sit back and enjoy the story, it’s well worth owning this edition of a great manga story.

Available to buy on DVD and Blu-ray  from 3rd September.