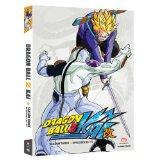 Z fighters vs the Androids

With Frieza incapacitated and the planet Namek about to blow up (Frieza’s fault) Super Saiyan Goku is about to leave for Frieza’s spaceship. But the tyrant begs for mercy and Goku relents and gives him some of his ki, enough for him to survive. But Frieza being Frieza he uses that energy to lash out one last time, however it is no match for a super Saiyan Goku who fires back and it smashes into the dismembered Frieza.

Back on Earth the Grand Elder passes on his mantle to Moori before disappearing and fortunately a Namekian year is only 130 Earth days long so wishes are quickly made. With Planet Namek obliterated the fate of Goku was unknown and that of Frieza as well.

Until one year later King Cold turns up on Earth with his rebuilt son Frieza to take revenge on Goku and the planet Earth.

But they are thwarted by a stranger who can go Super Saiyan and he and his sword easily defeat the annoying Frieza.

He tells the Z fighters that Goku would turning up soon at a nearby location, sceptical but compliant they follow him to witness their heroes arrival.

Amazed at his ability to predict the future when Goku arrives, the stranger

takes him to one side and tests his Saiyan abilities, which he passes. He tells Goku that in three years time a pair of androids that have devastated his time line and reveals that he is Trunks, the son of Vegeta and Bulma (go figure).

With three years to train before the arrival of the impending doom, they all agree to train as hard as possible, with Vegeta’s rivalry still boiling he won’t let

anything stand in the way of his becoming the best fighter in the universe, as all Saiyan’s do.

With time travel and androids in the mix, this is a great set up for what is to come in the Dragon Ball Z Kai series, watch out for the return of Dr Gero’s Red Ribbon Army and what the future holds for the Z fighters.