5 stars of Luffy and pals tearing up the World Government. 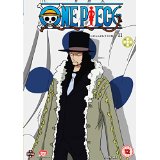 One Piece Collection 11 completes the Water 7 Arc and begins the Enies Lobby Arc. It is the third in the Water 7 saga and comprises episodes 259 – 275.

The Straw Hats are well and truly separated at the moment. Robin (Stephanie Young) is on the Sea Train, bound for Enies Lobby, the Marine Headquarters and either death or imprisonment in the notorious Naval prison, Impel Down. Franky (Patrick Seitz) and Usopp (Sonny Strait), now known as Sniper King, are also on the train, having been captured by CP9, and Sanji (Eric Vale) managed to sneak aboard before the train left the station. 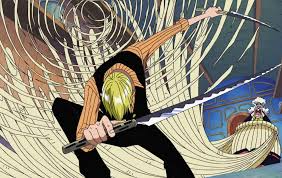 They gradually battle their way through the varied and highly entertaining adversaries on board the Sea Train, taking out one carriage at a time. The most notable of these must be Sanji vs. Wanze, with his Ramen Kenpo and his incredible edible combat suit.

Back on Water 7, the other Straw Hats have their own problems, with Luffy (Colleen Clinkenbeard) and Zoro (Christopher R. Sabat) both trapped and the Aqua Laguna bearing down on them. 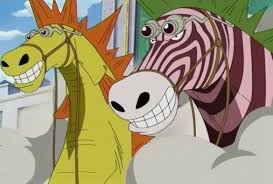 After a daring rescue by Nami (Luci Christian) and Chopper (Brina Palencia), they head off with Kokoro to find another Sea Train and head off after the others, with the Franky family in tow, pulled by Sodom and Gomorrah,  the giant Yagada.

We also get to meet the rest of CP9 and a very strange bunch they are too. Fukuro, with his zipped mouth, Jabra with his Fu Manchu moustache and Kumadori, with his mane of pink hair and his Kabuki style of speaking, form the remainder of the CP9 team, working for the World Government. 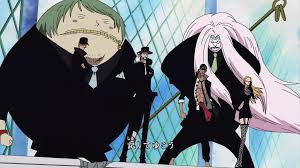 When they all arrive at Enies Lobby, the battles that ensue are epic and very enjoyable. It’s not often that you see all of the Straw Hat crew flexing their fighting muscles to this extent and through all the comedy it’s easy to forget just how powerful they really are. They are also learning all manner of new tricks along the way, which will no doubt prove very useful in future encounters and I wouldn’t be surprised if a few bounties go up by the end of this.

We find out all sorts of interesting secrets about Robin’s past and the Buster Call that destroyed her home, and we finally begin to see a reason for her strange behaviour. 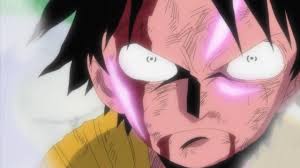 This is a brilliant collection and will be loved by any fans of One Piece. The Straw Hats are never more menacing than when they present a united front and that is most certainly the case here. The storyline is thundering along and with all manner of revelations that will leave you reeling, it is a must see.

“You’re guilty of three sins. Let me list them. First off, you dared to call yourself a chef in front of me. Second, you were disrespectful to your food. And third, you insulted my friends. For that, you’ll pay.” 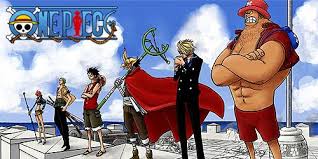